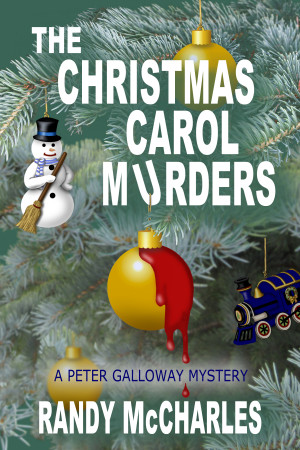 By Randy McCharles
Book 2 in the Peter Galloway Mystery series. A homicide detective turned private eye looks into a seemingly accidental death at a Christmas play. More
When Peter Galloway takes Angela Ford and her two children into hiding to elude her abusive husband, they wind up in Prince George, British Columbia, where they are unexpectedly embroiled in a series of grisly murders at a nearby high school. With the help and hindrance of the local RCMP, Galloway and Ford struggle through a sea of bureaucracy, power games, and victimized teachers in hopes of catching a killer before the next body drops.

RANDY MCCHARLES is a full-time author of speculative and crime fiction.

He is the recipient of several Aurora Awards (Canada's most prestigious award for speculative fiction) and in 2013 his short story Ghost-B-Gone Incorporated won the House of Anansi 7-day Ghost Story Contest.

In addition to writing, Randy organizes various events including the award-winning When Words Collide Festival for Readers and Writers.

You have subscribed to alerts for Randy McCharles.

You have been added to Randy McCharles's favorite list.

You can also sign-up to receive email notifications whenever Randy McCharles releases a new book.