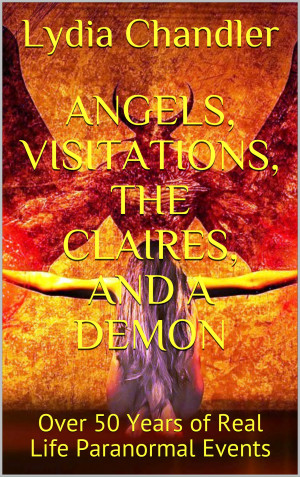 Angels, Visitations, the Claires, and a Demon: Over 50-Years of Real Life Paranormal Events

I discuss all the various paranormal events that have happened to me personally. Along with these events, names and definitions are various spiritual psychic senses that had been invoked are also given and explained. More
YOUR SPIRITUAL PSYCHIC SENSES
Much like you have five physical senses: seeing, hearing, touching, tasting and smelling. You also have the potential to experience eight “clair” senses or spiritual psychic senses.

In this ebook, I discuss all the various paranormal events that have happened to me personally. Along with these events, names and definitions are various spiritual psychic senses that had been invoked are also given and explained.

Lydia Chandler was born in Salisbury, Maryland, the oldest of three children. She spent the first nineteen years of her life living on a five-acre farm in southern Delaware with her two younger sisters and parents.

Ms. Chandler has been writing for as long as she could first hold a pencil. At 15-years of age she entered a contest, submitting a fifty word essay to a local radio station WICO-FM of Salisbury (MD). The best essay explaining why you wanted to be a D.J. would win. The prize? One hour live on the air. Ms. Chandler’s essay won. As a 17-year-old, she wrote a syndicated news column that spanned across two states.

Married in 1982 she had her one and only child, a son, Daniel, in 1983. She spent the next decade raising her son and supporting her husband as a stay-at-home mom.

After her second divorce she felt as though her life was finally on track. In December 2008, she found her way back to the Washington, D.C. area. At the “ripe old age” of 46, she enrolled in college for the very first time.

Life being what life often is - fluid - Ms. Chandler faced more of what life had to throw at her. Bilateral lumps (they turned out to be benign), a gun held to her head when a store she was in was being robbed, to the death of her life-long friend of a sudden heart attack. It was six months after Ms. Chandler’s dear friend’s death that she sought out solace the only way she knew how.

She began to write once more.

For the first time in her life she took on the task of writing short stories. “I never thought I’d see the day where I would be able to sit still long enough to write anything other than a poem!” Ms. Chandler has said many times since then. Her short stories, having been well received on her blog site, gave her the courage to step out from life’s shadows and put her dream fully and completely in front of her.

You have subscribed to alerts for Lydia Chandler.

You have been added to Lydia Chandler's favorite list.

You can also sign-up to receive email notifications whenever Lydia Chandler releases a new book.