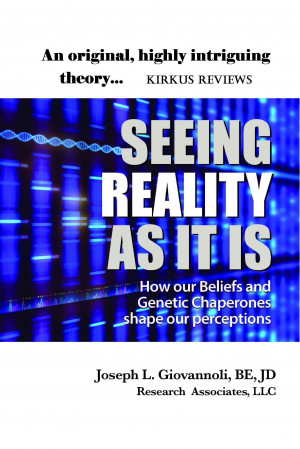 Seeing Reality As It Is

By Joseph L. Giovannoli
Why do we have very different views of climate change, political polarization, and of reality itself? One reason is that we inherit various biases and traits or “genetic chaperones” that help us to survive by altering the way we perceive reality. Also, hackers use social media data about our chaperones to give us “personalized” propaganda. The author describes ways to deal with these problems. More
"Seeing Reality As It Is" examines the question - If there is only one reality, why can't we agree on what it is? If we understand why we each perceive reality in our own way, we are more likely to make progress in dealing with political polarization, resource depletion, and climate change. An example of perceiving reality in our own way is seen in comparing the color perceptions of normally sighted and colorblind people. Due to genetic differences in their ability to sense color, they take away different perceptions from a common color experience.
In much the same way, we are born with various perceptive differences that cause each of us to “see” the same reality in different ways. These differences result from countless ancestral trial and error survival experiences. Today, perceptive differences we inherit include variations in courage-enhancing biases, levels of thought-altering neurochemicals, and slightly different brain circuits that influence how we think. The particular combination of survival enhancing biases and traits we inherit is referred to by the author as our "genetic chaperones”. As with colorblindness, we are unaware that we have a genetic chaperone until it is brought to our attention. Given the variations in our genetic chaperones, we each “see” different survival-enhancing versions of reality instead of perceiving reality as it is. In essence, our chaperones aid our survival, not by causing us to understand reality, but by creating fictitious perceptions that cause us to respond “as if” we understood reality. An inadvertent consequence of perceiving reality in this way is that our beliefs are shaped by the false perceptions of our genetic chaperones and not by reality as it is. What is more, our false beliefs can go on to distort our future beliefs because we have a brain trait that conforms new beliefs to fit the narrative of our existing beliefs. In other words, our beliefs alter our perceptions.
Recently, social media data–gathering has complicated another problem involving our genetic chaperones. Data that describes our genetic chaperone profiles is being used by “chaperone hackers” (propagandists) to manipulate how we see reality by fabricating “personalized” fake news, social media events, and so on.
Reaching agreement on what reality is can be daunting given the fictitious perceptions our genetic chaperones create. It follows that addressing problems that divide us and threaten our future might begin with understanding the nature of our genetic chaperones and how to minimize their influence.
Available ebook formats: epub mobi pdf lrf pdb txt html
First 8% Sample: lrf pdb Online Reader
Price: $8.95 USD
Buy Add to Library Give as a Gift
How gifting works
Create Widget
Tags: reality culture beliefs belief system perception neuroscience chaperone religiosity belief formation belief transmission
About Joseph L. Giovannoli

Not long after his birth in a small town in Eastern Pennsylvania, Joseph Giovannoli’s family moved to Northern New Jersey. During his formative years, in addition to Scouting, he became interested in science and history. As a boy, he realized that reality wasn’t the same for everyone. He wondered what caused people to “see” the same event in different ways. As he matured, his interests in a broad range of topics lead to his developing the perspective of a generalist. In time he studied science and applied science at Stevens Institute of Technology and law at Fordham University School of Law. After receiving a Juris Doctorate from Fordham, he joined the law department at Union Carbide in New York City. Subsequently, he co-founded a law firm located in South Orange, New Jersey, and soon became involved in entrepreneurial ventures. One startup venture involving computer technology provided services to Fortune 500 companies and agencies of the Federal Government. To streamline purchasing at that startup, he invented and received an early e-commerce patent for an automated reverse auction purchasing system. Zillow and LendingTree acquired licenses to use that technology. In recognition of that invention, he was inducted into the New Jersey Inventors Hall of Fame as Inventor of the Year in 2013.
As time permitted during his career, he continued research into why people perceive reality in widely different ways. In 2000 he published The Biology of Belief that incorporated his understanding of then-existing research into neurological and cultural processes that influence how we perceive reality. Since then, the internet has enabled non-academics to gain expanded access to neurological research. That research, which uses new brain imaging technology, enabled him to formulate original concepts that explain the various ways in which we perceive reality. In Seeing Reality As It Is, he describes how our different versions of reality derive from our inherited brain differences and from beliefs shaped by our past perceptions of reality.
An avid reader of research abstracts and a student of history from the Big Bang to today, he and his wife Shirley Wescott reside in Northern New Jersey.

Reviews of Seeing Reality As It Is by Joseph L. Giovannoli

You have subscribed to alerts for Joseph L. Giovannoli.

You have been added to Joseph L. Giovannoli's favorite list.

You can also sign-up to receive email notifications whenever Joseph L. Giovannoli releases a new book.