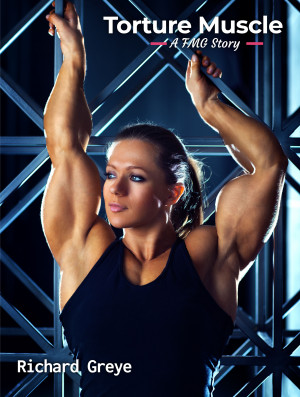 Krista Welch was ahead of her time for the 1980s. A feminist with a chip on her shoulder, she sets out out to deconstruct the label of the ‘weaker sex.’ Overcoming sexism in the gym in order to live out her dream, she builds a physique that gets her noticed by all the wrong men. Unsatisfied with a string of schmoes and competitive muscle-men, she finally meets Charles, a successful businessman. After only a few dates she and Charles are kidnapped and she finds herself at the center of a strange web of corporate revenge.

By day Krista is injected with performance enhancing drugs and forced through grueling workouts and by night her body becomes the instrument of both ecstasy and torture. As her body grows to unimaginable proportions, she goes through internal changes that make her question who she really is as she struggles with the conflict of the desire to control someone and the nagging question of why. If she and Charles finally escape will her body be so colossal and mind be so contaminated by reprogramming that she can no longer live a normal life?

The story is told from the perspective of Krista, a woman who has pushed herself to reach the pinnacle of female bodybuilding in the 1980s. She is approached by a schmoe- and I use the term precisely, here- named Charles, who screws up his courage and asks her on a date, which she accepts. They date for a time, but Krista eventually decides she wants more out of a relationship. Before she can break it off, however, she and Charles are kidnapped and transferred to a hidden facility where she is put on a new, brutal steroid and training regimen and conditioned to take her anger and frustration out on the schmoe. Eventually, she and Charles escape, but not before Krista has grown so overwhelming big and muscular that she feels she can no longer be seen in public.

Without giving away the final denouement, I will say this: the story was a fun read, with very few surprises. It wasn't overwhelmingly long and the plot mainly served as a framework for exploring Krista's muscles and growth. Charles development was, perhaps, a bit predictable, but the way it was told made the end of the story thoroughly enjoyable. I would definitely recommend this story to anyone who enjoys the aesthetic appeal of massive muscle women; additionally, there are a number of times when Krista demonstrates that she is not only big, but also immensely powerful.

This book is a solid purchase for any sthenolagniac or cratolagniac.

I’ve read all the books from this author, and it is significantly different from his previous works. The overarching topic of men with a fetish for female muscle is still present, the difference here is, Torture Muscle goes to a more extreme form of it. It will definitely please all the lovers of extreme female growth and science fiction altogether. It also highlights female domination in a fun way.

It is, as usual, very well written and spot on to describe the scenes and the interactions between the characters. The character development is strong and in depth. Also, sensual scenes are described, taking different forms as the story progresses.

It’s worth reading even if you are not a fan, at least for the author’s writing skills and also because this topic is dealt with far more realism than on internet forum boards.

Im a fan of this authors work. To me his last book Built is pretty much close to the perfect FBB muscle novel and probably the best long form thing ive ever read in the genre. This book is a great follow up and has a different tone. Definitely more for the hardcore fan of fem muscle growth stories won't be let down. Also the writer has an amazing eye for description as well as character development that is often missing from these types of stories where it feels as if they are just a list of different acts committed by the character. Greye actually takes time to create fully fleshed out characters and worlds which makes the writing even more vivid. A really stand out work!

A great story that mixes in muscle, mystery, and erotica to build to a satisfying ending.