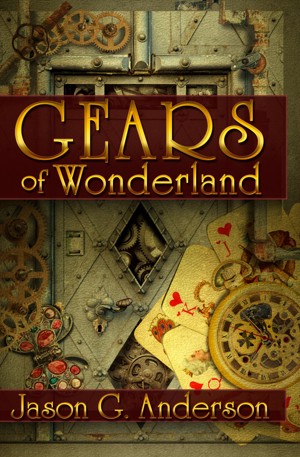 But things have changed since Alice’s visit. The Knave of Hearts has seized the Heart throne, conquered all of Wonderland with his steam-powered technological marvels, and rules the land with an iron fist.

Aided by the Mad Hatter’s daughter, James journeys to discover why he has been brought to Wonderland and how the tattoo on his arm could be the key to Wonderland’s salvation—or its destruction.

Jason G. Anderson lives in Hobart, Tasmania with his wife and several cats. During the day, he helps Antarctic scientists manage the vast quantities of data they collect. At night, he dreams of other worlds and realities much different to our own. His writing interests include sci-fi, urban fantasy, post-apocalyptic and steampunk.

James Riggs is a guy letting his boss and his fiancé boss him around. One evening his fiancé gets upset about a chess set he purchased when he promised to give up the ‘silly game’ and then his boss calls to tell him he has to cancel his planned vacation to come into work and cover for him. She kicks him out and he walks to his old friend’s apartment to stay the night there. However, just after he gets there a strange man comes to the apartment, murders his friend then chases James out to the street where a yet another strange man in a white suit grabs him and sends him down a hole into Wonderland. That’s when things get even stranger.

James is now in Wonderland, but in a very different one than Alice was in. The Knave of Hearts has taken the throne, conquered the other kingdoms and is mass-producing stream-powered machinery. Steampunk Wonderland has emerged, but James arriving from Otherworld has thrown a massive spanner in the works.

I haven’t read Alice in Wonderland in um, *cough* many many years (let’s leave it at that) and I haven’t watched the Disney® movie since the kids were little, so many of the references to the original book were probably lost on me. However, I do remember enough to know that this book is a clever take of a favorite tail. Well-written and fast-paced, with a twisty plot, interesting world and likeable characters, I enjoyed this book very much.

*Many thanks to the author for providing me with a review copy. Please see disclaimer page on my blog.

(reviewed the day of purchase)
Donna Lawrence reviewed on Nov. 29, 2011

Let me begin by saying, I love the cover of this book. I am automatically drawn to a book with a great cover, and this one's a winner. I am also new to the entire steampunk movement but I find it's a lot of fun! I love the combination of steampunk and wonderland in this book. Jason Anderson has created a story that Lewis Caroll would like.
I don't like to reveal or spoil the story with my reviews, just buy this book- it's a gripper! You won't want to put it down until you're finished. When I was finished, I found myself looking for more pages, and rereading passages. This wonderland has kingdoms with wars, flying ships and other fun stuff. James is a wonderful character (no pun intended). He visits a land he believed to be just a story from a book. He becomes involved in an amazing journed.

I hope to read more from Mr. Anderson. I can see more adventures for James in Wonderland.

You have subscribed to alerts for Jason Anderson.

You have been added to Jason Anderson's favorite list.

You can also sign-up to receive email notifications whenever Jason Anderson releases a new book.