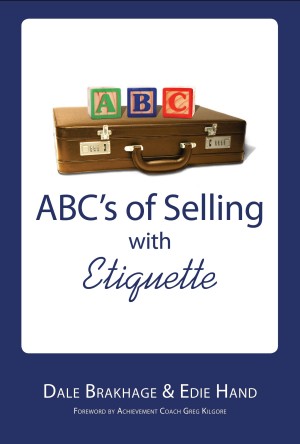 ABC's of Selling with Etiquette

By Dale Brakhage
& Edie Hand
People everywhere want to succeed in business and need to know how to be persuasive and behave appropriately. Everyone should learn to sell! "ABC's of Selling with Etiquette" is easy to read, very understandable, and full of valuable information. More
Communicating your ideas in ways that persuade others to accept them is “selling,” and everyone does it. Besides salespeople, all teachers, preachers, parents, politicians, attorneys, employees, teenagers, etc., want other people to agree with what they say. Everyone wants to be more persuasive.

This book fills a huge need. Amazingly, schools do not offer classes in persuasiveness. Most people never receive formal sales training. No wonder most people today struggle with “selling” their ideas much less products or services. Hundreds of millions of people are trying to succeed in business, and they all could benefit from learning how to effectively engage and be persuasive with others. Everyone needs to know how to sell.

The subject of this easy-to-read and very-understandable book is SELLING with appropriate ETIQUETTE, and it can help EVERYONE…
•communicate more effectively with others,
•persuade others to accept your ideas and agree with you, and
•get MORE of what you WANT out of life.

What makes this book unique? The ABC-format of the chapters makes the book very accessible as does its 8th Grade reading level and encouraging conversational second-person style. Readers enjoy the “bite-sized” short chapters and interspaced anecdotes. Fewer people today take time to read for an hour. They communicate today in short text messages and emails instead of chapters and novellas. Each chapter in this book stands alone and takes just minutes to read. Individuals can easily read and learn a few chapters a day. Businesses and schools can add a chapter a day into their routine, briefly providing valuable training that everyone can apply in their life and work. The content is unique in its simplicity. It distills the complex behavior of selling into 26 easy-to-understand basic concepts. The concepts build upon each other until, by the end, the reader has a complete understanding of how selling works, why customers buy, and how to be more persuasive. As an added bonus, the book presents business etiquette. Knowing how to behave in typical business situations builds the reader’s confidence. Knowing proper business etiquette allows the reader to feel more comfortable in public and focus their attention on being more persuasive.

Dale Brakhage grew up in Minden, Louisiana. He earned a summa cum laude degree in Educational Psychology in 1978. Entering the U.S. Army, Dale rapidly advanced to the rank of Captain. He wrote a national plan to control nuclear and chemical weapons accidents that the Department of Defense adopted in 1982. Over the years Dale has excelled in pharmaceutical sales. He wrote the marketing plan that made Lortab famous, eventually co-owned his own pharmaceutical company, and most recently served in 2008 and 2009 as President of the American Advertising Federation in Birmingham, AL. He is the current President of the Birmingham City Schools Career and Technical Education Advisory Board. Dale is an author, sought-after motivational speaker, business-training consultant and Ford Mustang restorer. Dale and his wife, Cora, reside with their two children, Athena and Erik, in Indian Springs, Alabama. To learn more about Dale Brakhage, visit: http://www.dalebrakhage.com

You have subscribed to alerts for Dale Brakhage.

You have been added to Dale Brakhage's favorite list.

You can also sign-up to receive email notifications whenever Dale Brakhage releases a new book.