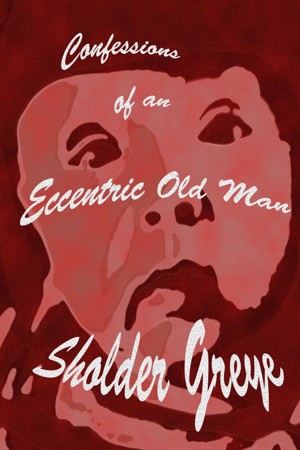 Confessions of an Eccentric Old Man

From Chapter 1:
"Be prepared for most unsettling revelations! My confessions, delivered on my death-bed, do not, in the slightest, deviate from Truth; I have nothing to hide, Dear Reader, nothing to protect. I lay bare the most dark, most secret regions of my heart; to the judgment of a stern and unforgiving world..."
Available ebook formats: epub mobi pdf rtf lrf pdb txt html
First 30% Sample: epub mobi (Kindle) lrf more Online Reader
pdb
Price: $6.99 USD
Buy Add to Library Give as a Gift
How gifting works
Create Widget
Tags: fiction occult humor fantasy memoir philosophy autobiography metaphysics
About Sholder Greye

Sholder Greye lived, died, was resurrected, and may proceed through these cycles again, with no particular allegiance to temporal order, as the whim of his Creator dictates.

His Creator is Yarrow Paisley, who lives, has not died, will not be resurrected, and for whom none of these events represents a "cycle," unless considered within the greater context of the "Natural Order."

December 5, 1995 was the date on which a text file entitled "The Mad Philosopher: Confessions of an Eccentric Old Man," was uploaded to etext.org, copyrighted to Sholder Greye but free for distribution and sale by all, as long as attribution remained with the author. Well before the "Creative Commons," Sholder Greye pioneered the frontier of alternative "Intellectual Property" models.

And now, of course, with the advent of viable Print-on-Demand technology, Sholder Greye has been resurrected yet again, and his work is finally obtainable in the more durable print medium.

Reviews of Confessions of an Eccentric Old Man by Sholder Greye

You have subscribed to Smashwords Alerts new release notifications for Sholder Greye.

You have been added to Sholder Greye's favorite list.

You can also sign-up to receive email notifications whenever Sholder Greye releases a new book.