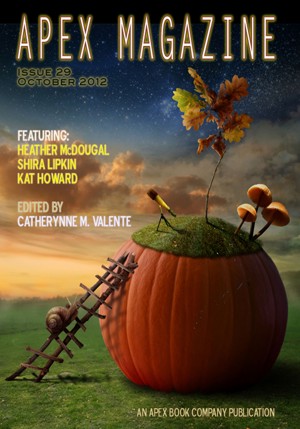 Fiction:
“I Am Thinking of You in the Places Between”
Shira Lipkin

“To the Mistress of the Labyrinth Give Honey”
Heather McDougal

“A Life in Fictions”
Kat Howard

First 20% Sample: epub mobi (Kindle) lrf more Online Reader
pdb
Price: $1.99
Free! USD
Buy with coupon Use the code AGB60 at checkout to get this book for free during our site-wide promotion!
(Offer good through May 31, 2020 )
Have a better coupon?
Add to cart, then apply your coupon
Add to Library Give as a Gift
How gifting works
Create Widget
Tags: apex publications apex book company apex magazine
About Catherynne M. Valente

Catherynne M. Valente is the New York Times bestselling author of over a dozen works of fiction and poetry, including Palimpsest, the Orphan’s Tales series, Deathless, and the crowdfunded phenomenon The Girl Who Circumnavigated Fairyland in a Ship of Own Making. She is the winner of the Andre Norton Award, the Tiptree Award, the Mythopoeic Award, the Rhysling Award, and the Million Writers Award. She has been nominated for the Hugo, Locus, and Spectrum Awards, the Pushcart Prize, and was a finalist for the World Fantasy Award in 2007 and 2009. She lives on an island off the coast of Maine with her partner, two dogs, and enormous cat. 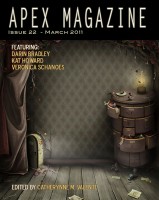 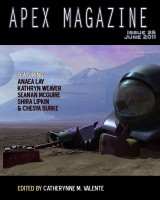 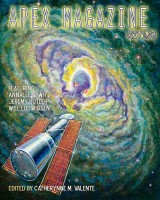 You have subscribed to alerts for Catherynne M. Valente.

You have been added to Catherynne M. Valente's favorite list.

You can also sign-up to receive email notifications whenever Catherynne M. Valente releases a new book.