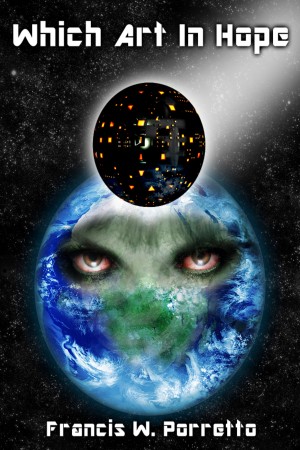 Which Art In Hope

Rated 5.00/5 based on 6 reviews
Hope, a world peopled by anarchists, is in ecological crisis. For 1200 years, a secret Cabal has elevated powerful psi talents to the Godhood of Hope -- the management of Hope's crust -- at the eventual cost of their lives. Now only two remain: Armand Morelon and Victoria Peterson. But one is utterly unwilling and the other is murderously insane. The survival of Mankind hangs in the balance. More
Hope circles a white dwarf 26 light years from Earth. Its denizens are the descendants of the Spooner Federation: anarchists who fled the Solar System just ahead of a military expedition intended to annihilate them.

When the Spoonerites' planetoid-starship entered orbit around Hope, it looked like a dream world. The planet was strikingly Earthlike. Its atmosphere was breathable, with slight overages of oxygen and argon. Only plant life showed on the scanners. Fresh water was abundant. The crust was rich in antimony and copper, but otherwise terrestrial in composition.

Yet Earth flora introduced to Hope's soil withered and died rapidly. Earth fauna would not reproduce. Human birth rates were sluggish, and many of the children were handicapped. Only longevity therapies developed in flight prevented the colony's demise. For many years the colony scratched by on hydroponics, until a secret Cabal learned to create Gods of Hope: men gifted with unusual psi powers, trained and drugged into undertaking the protection of Earth-based life from the flows of heavy metals that perfuse Hope's soil.

The job is lethal. Despite the ingenious longevity therapies available, within 50 years each God succumbs, first to madness, then to progressive neurological deterioration and death. Immediate replacement is mandatory.

In 1200 years, there have been 24 Gods of Hope. The Cabal seines candidates from the population on the basis of demonstrated psi powers, subjects them to an unchanging conditioning program, and elevates them to the Godhood when the time is right.

Outside the Cabal, Alain Morelon, sole survivor of the interstellar Hegira and the most revered individual on Hope, alone knows of and supports its work. In exchange for that support, the Cabal has agreed that no Morelon shall ever be deified, regardless of suitability. The restriction is severe, for the Morelon clan is rich in the psi powers.

But the current God is deteriorating, and the Cabal has no candidate for his replacement. Some Cabal members fear that they've unwittingly bred psi powers out of Man on Hope.

Armand Morelon is 18 years old, heir apparent to the Morelon holdings, and an exceptional psi talent. He passes through the screening at Gallatin University with the highest scores ever achieved on the ancient Rhine tests. But he is a Morelon.

Only Armand and a classmate, Victoria Peterson, have scored high enough to be worth considering. Parental abuse has made Victoria psychotic. Normally she'd be deemed unsuitable, but the lack of choices causes the Cabal to stretch its usual standards...and to keep Armand in the program despite its promise to Alain.

For the first time since the beginning, all the candidates are unsuitable for some reason. Yet Armand's psi prowess is all that the Cabal could want. Victoria's psychosis is well hidden, her powers, while less than Armand's, are more than adequate, and her training proceeds.

When he becomes aware of the responsibility for which he's being groomed, and the sacrifices it will require of him, Armand recoils. He and his fiancee Teresza decide to flee. Alain, unaware of their decision, assumes that the Cabal has deified his heir.

But:
-- It's mentally unstable Victoria whom the Cabal will deify;
-- Armand and Teresza have taken refuge among the Hopeless, Hope's ostracized criminals and ultra-anarchists, who practically worship them;
-- Unbeknownst to all, Idem, the original God of Hope and the real reason the Cabal's deities inevitably die on their thrones, is stirring, attempting to make alliance with Armand in a desperate try for freedom;
-- Victoria's psychosis and a series of disasters will turn her into a threat to the entire planet. Armand and Idem must join forces against her, with little hope of success.
-- No radio emission from Earth has reached Hope since the Spoonerites made planetfall.

Francis W. Porretto was born in 1952. Things went steadily downhill from there.

Fran is an engineer and fictioneer who lives on the east end of Long Island, New York. He's short, bald, homely, has bad acne and crooked teeth. His neighbors hold him personally responsible for the decline in local property values. His life is graced by one wife, two stepdaughters, two dogs, four cats, too many power tools to list, and an old ranch house furnished in Early Mesozoic style. His 13,000 volume (and growing) personal library is considered a major threat to the stability of the North American tectonic plate.

Publishing industry professionals describe Fran's novels as "Unpublishable. Horrible, but unpublishable all the same." (They don't think much of his short stories, either.) He's thought of trying bribery, but isn't sure he can afford the $3.95.

Fran's novels "Chosen One," "On Broken Wings," "Shadow Of A Sword," "The Sledgehammer Concerto," "Which Art In Hope," "Freedom's Scion," "Freedom's Fury," and "Priestesses" are also available as paperbacks, through Amazon. Check the specific pages for those books for details.

Wallow in his insane ranting on politics, culture, and faith at "Liberty's Torch:" http://www.libertystorch.info/

And of course, write to him, on whatever subject tickles your fancy, at morelonhouse@optonline.net

Reviews of Which Art In Hope by Francis W. Porretto

It is a testament to the authors skill when he creates and describes a world that I'd love to jump into. This is one of those worlds.

It's not a perfect world, as villainy is just a part of the human condition. It is those imperfections that allow our protagonist to develop and grow. It's a journey well written that kept me turning page after page.

I thoroughly enjoyed this book. It took me forever to read but that's my own fault for reading very slowly. I wasn't expecting to be so engrossed in it as I'm not really a fan of science fiction in general, but it was a very good, very well written book and I think you'd be a fool not to check it out.

I am thrilled to find author Francis Porretto. I have read several of his books and enjoyed them all. This one did not disappoint.

The story is well crafted, and the characters finely drawn. The main character, Armand Morelon, is a true hero -- how wonderful to find a hero in today's fiction!

This book is a real "page turner," and I was sorry when it came to an end.

I've been a fan of Mr. Porretto's writing since I came across his blog last year.

"Which Art In Hope" is perhaps most easily described as a science fiction novel. But Porretto will surprise you. Against a backdrop of a sweeping interstellar saga, he skillfully blends big themes, deep characters and how moral choices affect - even transform - not only individuals, but societies as a whole.

Be prepared to spend more time than usual wrestling with your take on "Which Art In Hope." It reminded me of vintage Heinlein - not in style, necessarily, but in how he's not afraid to have his heroes (and "villains?") address questions of ethics in strong clear terms. This isn't just space-opera.

I mostly read romance and mysteries. Fran asked me to read Which Art In Hope anyway. He called it "science fiction for people who hate science fiction," and suggested that it might be more to my taste than I thought.

This is character-driven SF. It has very little tech crap in it. It's beautifully written. It's as involving emotionally as anything else I've ever read. And even if it's about the survival of a whole world that MIGHT be the last refuge of the human race, for me the stakes were about what would happen to Armand, Teresza, Charisse, and the rest of the major characters.

Hope is a surprising society, almost the exact opposite of Aldous Huxley's Brave New World. Huxley shows you something that looks really good on the surface, but it's a horror show underneath. Hope is the opposite: it looks modest, maybe even stark, on the surface...but the more I read about it, the more I wanted to make it my home.

Fans of ray guns, faster-than-light travel, time travel, and so forth should avoid this book. Fans of the human heart should put it at the top of their lists.

This work stands out as a gem on Smashwords.

Once I got started, I was stuck to the screen and damned if there wasn't a tear in my eye at the end of the story.Npt many manage that!

Francis Porretto is an author destined to go far!

Nowhere else as Smashwords are such quality tales available so cheaply, so spend up!

You have subscribed to alerts for Francis W. Porretto.

You have been added to Francis W. Porretto's favorite list.

You can also sign-up to receive email notifications whenever Francis W. Porretto releases a new book.