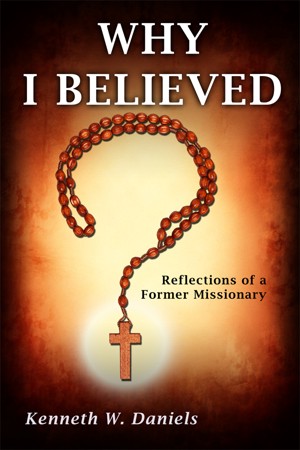 Why I Believed: Reflections of a Former Missionary

Kenneth W. Daniels (1968-), son of evangelical missionaries, grew up in Africa and returned to Africa as an adult to serve with Wycliffe Bible Translators in Niger on the edge of the Sahara Desert. While studying the Bible on the mission field, he came to doubt the message he had traveled across the world to bring to a nomadic camel-herding ethnic group. Though he lost his faith and as a result left Africa in 2000, he remains part of a conservative Christian family. He currently resides with his wife and three children in suburban Dallas, TX, where he works as a software developer. Daniels received his BS in computer science and engineering from LeTourneau University, Longview, Texas, and a one-year certificate in biblical studies from Columbia Biblical Seminary (now Columbia International University), Columbia, SC.

Reviews of Why I Believed: Reflections of a Former Missionary by Kenneth W Daniels

You have subscribed to alerts for Kenneth W Daniels.

You have been added to Kenneth W Daniels's favorite list.

You can also sign-up to receive email notifications whenever Kenneth W Daniels releases a new book.