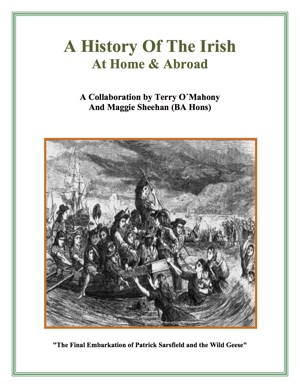 A History of the Irish at Home and Abroad

I was brought up in Bandon, County Cork by my grandparents. My grandfather managed a flour mill which was burnt to the ground by the IRA. This incident ruined his life, causing him to lose his job, status and standing in one fell swoop. Thereafter he was reduced to breaking stones by the roadside which he found both futile and humiliating. For the rest of his life he felt a hatred for the IRA. Annoyingly for him, my grandmother was always singing IRA rebel songs which unsurprisingly polarized their relationship.
My mother became pregnant when very young and was sent to a Magdalene Laundry to hide the shame of her pregnancy; do penance for her fall from grace and work slavishly under the convent’s harsh regime and cold discipline. As a rule, once a child was born into these circumstances it was taken almost immediately from its mother and handed over to the authorities who would then send it to one of the many industrial schools that peppered the country at that time. The general practice was that the unfortunate mother was never able to see her child again.
Luckily for me, my grandmother was made of sterner stuff. She intervened and, being very strong willed, forced the authorities to hand me over into her care. She did so, of course, despite the disapprobation of the Catholic Church. My mother however, never recovered from the experience and because of the mores of the time, felt she could never have a proper relationship with me, her son.
But some time later my mother did go on to marry happily and produced three more children; all of whom achieved academic success. One became the very first female Lecturer in Civil Engineering in Cork University. My mother´s husband, Jerry Murphy, was featured on the front cover of “Time Magazine” as `The New Face of Ireland´.
When my eldest son´s wife was pregnant she and he demanded to know who my father was. At that time there was only one relative still alive who knew the answer and he told me that my father had emigrated from Ireland to America and that his name was Bunny (Michael) Sheehan. I found this news somewhat disconcerting as my long time partner’s surname is ´Sheehan´ and she knows absolutely nothing about her parentage, other than they were Irish. It was in fact this lack of knowledge on her part that sparked her interest in learning more about her own wider history and she addressed the task of turning my thoughts into words and written text.
My son, James, doggedly continued to pursue his enquiries and discovered that my father hadn´t in fact migrated to the States but had made a new life in Cambridge, England, with a wife and children.
Ironically, this same son had earlier spent a few years in Cambridge and unbeknown to him had had his letters regularly delivered by his own grandfather, who was the local postman. Sadly, they didn´t get to know each other but it demonstrates how life frequently proves to be stranger than fiction.

Fascinating Book! A new look at the intriguing story of the Irish people, told in a way that makes it very accessible to anybody with an interest in the subject. It's a must for anybody with Irish roots, highly informative and full of information you definitely won't have heard before.

This book is Amazing! I have dipped in to different chapters and find it full of fascinating factual information .Its really well written and easy to read .The authors must have worked so hard on researching this ,and it shows.I would highly recommend this book to anyone with an interest in the history of the Ireland and its people.

You have subscribed to alerts for Terry O&acute;Mahony.

You have been added to Terry O&acute;Mahony's favorite list.

You can also sign-up to receive email notifications whenever Terry O&acute;Mahony releases a new book.