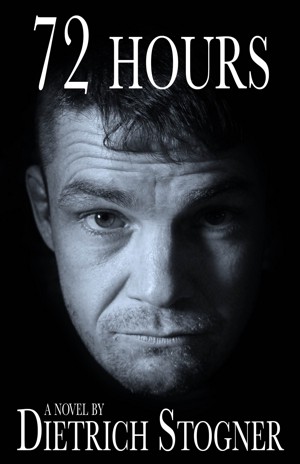 By Dietrich Stogner
A fusion of black humor and breakneck action, 72 Hours is the debut novel by Dietrich Stogner about two navy veterans who get dragged into the search for a missing teenage girl. In the span of 72 hours, they come face to face with the limits of their own morality, and the depth of their own ruthlessness. More
Michael Whiting is fresh out of the US Navy, and left the service with no direction, no purpose, and not a drop of motivation in his life. His days are filled with aimless hobbies, a slightly neurotic basset hound, and his former shipmate and certified lunatic Dave Lopez. But when Lopez volunteers their services in tracking down a rebellious 18-year-old girl, Whiting finds himself on a path he never could have imagined.

In the span of 72 Hours, Whiting and Lopez spiral deep into a world of ruthless police and dangerous criminals, a world of mystery and blood. In the end, they must face their own doubts and fears, and decide how far they will go to do what's right.

This debut novel by Dietrich Stogner is a fusion of black humor and lightning action, and draws inspiration from authors like Dennis Lehane and Janet Evanovich.

Dietrich Stogner was born in 1978, and spent the majority of his childhood in Logan, Utah. After graduating high school, he joined the US Navy and spent 7 years serving on submarines. He now works as a freelance writer, and has completed degrees in journalism and economics.

Dietrich began writing at a young age, and was inspired early on by science fiction writers and comic books. As he got older, he discovered Stephen King, and became a lifelong fan. Today, he spends his time in his Nashville, Tennessee home with his family. He's an avid gamer, and loves nothing more than fiddling with the latest gizmo or gadget.

Dietrich is also the producer and co-host of the weekly podcast The Library Police, where he discusses books and reading with his long time friend Josh Mauthe.

You have subscribed to alerts for Dietrich Stogner.

You have been added to Dietrich Stogner's favorite list.

You can also sign-up to receive email notifications whenever Dietrich Stogner releases a new book.