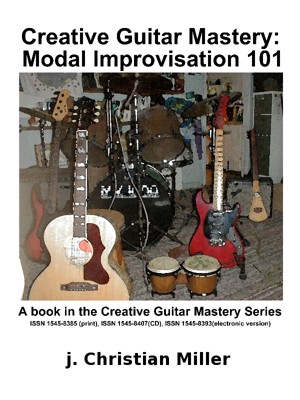 Chris Miller characterizes himself first of all as a lifelong learner. He has studied, breathed, and lived creative guitar for more than twenty-two years. He has been a teacher of the guitar for most of those years. From the very beginning of this long career he approached guitar mastery from a creative viewpoint, from the point-of-view of one who is trying to express their own art through their own unique voice and instrument.

First, Chris pursued the traditional path to music learning. He studied traditional harmony, voice and piano for a few years at Southeastern Community College in Chadbourn, North Carolina. He holds an Associate in Fine Arts in Music degree from this institution.

He also played bass guitar for a country band that traveled around the Southeast. During this time he also taught private guitar lessons extensively through the local music store, where he gained experience in instructing, nurturing and coaching people of every description who were seeking clarification of the creative whisper they heard in their hearts.

Then Chris attended Berklee College of Music in Boston, Massachusetts studying modern harmony, guitar performance, and ear here. His viewpoint was always from the creative bent. Harmony and Music Theory were always very strong points, so he made it far in his studies of how music all fit together. But growing frustrated with the lack of framework that was more coherent in its approach, especially as regards the knowledge necessary to practice the art of creative guitar, Chris felt a more creative approach was needed along with a framework built toward a sort of creative vocabulary to work from.

With this dissatisfaction for the lack of a more coherent synthesis aimed at the creative guitarist he then set about creating such a system. Practicing as both a singer/songwriter, Teaching, learning, and playing helped to eventually bring about a transformation in the way Chris viewed and taught the guitar. He taught guitar workshops through small community colleges while he honed the material that would ultimately lead to this book and others.

Meanwhile Chris grew DoublePlanet.com, the publishing company and recording service he operates to bring this material to the world. Chris returned to school some years later to exert his keen sense of learning again and in 2000 graduated with diplomas as a Microcomputer Specialist and Networking Specialist, staying on the very edge of technology as a medium to learn and entertain with.

He continues to develop his lifelong work as a learner, teacher, guitarist, producer, entrepreneur, publisher, technology consultant, and many other diverse activities that involve music, learning, teaching, and media.

You have subscribed to alerts for j. Christian Miller.

You have been added to j. Christian Miller's favorite list.

You can also sign-up to receive email notifications whenever j. Christian Miller releases a new book.