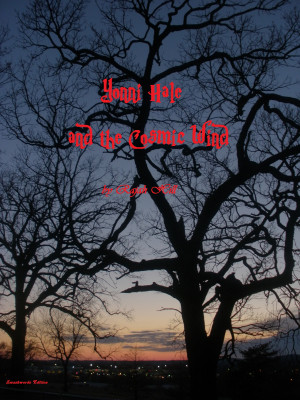 Yonni Hale and the Cosmic Wind

My father was the Storyteller and my mother was the Reader. Between them, my love of a good story was fostered at a very young age. I used to fill Big Chief tablets with story after story, my hand barely big enough to hold those fat pencils.

Even though I fantasized about being an archeologist (back BEFORE Indiana Jones), or a veterinarian, or an architect (before my high school principal told me GIRLS don't become architects; the swine!), my interests always returned to writing. As stories flow through me, I feel at one with the cosmos, clearly understanding why ancient writers believed they were inspired by muses.

I achieved all my professional goals in the time frame I allotted myself in 8th grade, then found myself the victim of someone else's vanity and ambition--losing my full-time job in the process. I realized then that I could become a bitter old woman, or I could do what I always felt called to do--write.

So I choose to write. Find my works under the names Ruth J. Heflin or Rajah Hill. 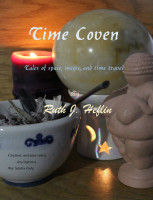 My Thoughts: I've had this book sitting waiting for a review for about a year and a half. To my intense amazement, when I went looking, I saw that no one else had it on their shelves on Goodreads, it didn't even exist on Shelfari or Amazon, no one had reviewed it on Smashwords (which is the only site on which it is available to buy as far as I can tell) and there are only four short reviews on LibraryThing, which is where I originally won a copy! This astonishes me, as I've never seen something like this before. It's really a pity, because it's a quite decent story featuring an almost-eleven-year-old girl with a vivid imagination.

There are a few formatting problems early on, in the several pages of quotes from other books about the wind that begin the book, where the font changes size and is almost too small to read a times, but once I was into the actual book that ended, and it's easy enough to change the font size on my Nook to see the smaller areas, so all it did was slow me down a little.

I will say that while this is a decent story, a good content and line editing would really make it shine. There aren't a lot of spelling or grammar errors (a few, like “heal” for “heel” are fairly endemic, though), but it could still use some cleaning up. For instance, at one point Yonni talks to one of her friends, and walks away. Rather than remaining in Yonni's head, like we have all the way so far, suddenly we're in her friend's head for a paragraph. There are also a lot of tense shifts from present to past to a couple future tenses that will probably drive some readers nuts. Also, it is repeatedly said throughout the book that Yonni is 10, but also that she is in 6th grade, which is not possible unless she was skipped ahead a year. Otherwise the law requires that a child be at least 11 before they are in the 6th grade, or have their 11th birthday within a certain period of time after starting 6th grade.

While it seems I have a lot of criticisms, I really did love this story and this book. There is mention of a sequel, called Yonnie Hale and the South Wind, but I do not know if this sequel actually exists. If it does, I would love to read it. However, I would strongly encourage the author to have this book further edited. What is a very enjoyable and fun read could be something truly amazing with just a little more polishing. There was a chapter toward the back where I literally cheered aloud, and then two of my favorite series were mentioned: Harry Potter and the Dark is Rising, which also feature (at least initially) 10-year-old going on 11 characters.

The reading level on this one is a little hard to assign. The main bulk of the story is about Yonnie Hale, who is 10 through most of the book, which would be middle grade (MG). However, a lot of the issues deal with reaching maturity and taking control of your own destiny, so that leads me to think that it might be better for Young Adult (YA) readers. But then there are the chapters with the mayor, in which we receive an in depth look at a truly despicable character doing truly despicable things, some of which are very adult in nature. So that leaves me thinking this is a very adult book in many ways. I would recommend that any consideration for younger readers be filtered through their maturity level. While I might have had trouble with this one when I was 10 myself, I think by 12 I would have been fine with it, while other people I know might not have been able to really understand some of the themes until they were much older.

A lot of the magical ideas in this are particularly interesting. I love how the author has worked in so many different cultures. If only it were better edited I would be willing to recommend this wholesale to almost anyone, but as it is, too many people I know would not be able to see past some of the issues and just enjoy this wonderful, excellent story. It's been a year and a half since I received this book and in this time not a single person has reviewed it on Goodreads or Smashwords, and only four on LibraryThing. I had to physically add it to Shelfari myself. In some ways this is very good, as that means there has not been any negative attention put on it yet. I would recommend that the author take the time to have this gone over professionally and then re-release it on a wider market. I truly this that with just a little more work this could be a major hit among the crowd that has been missing Harry Potter. I hope the author will see this review and take this advice to heart, and also take the same steps to polish the next book in this series. This has already been an extraordinarily long review, but it's an extraordinary book, and I can only hope that my passion for it will help in some small way to reach a larger audience. Meanwhile, if you're interested, go to Smashwords, grab your own copy, look past the few problems and see the bigger picture, because I think this one is a real winner. I can't give it the full 5 stars, no matter how much I want to, because of the flaws, but I am willing to give it 4 just on its overall merits. Check it out. It's truly magical.

Disclosure: I received a copy of this book through the LibraryThing Members' Giveaway program in exchange for an honest review. All opinions are my own.

Synopsis: She was warned. She tried to avoid it. But Yonni Hale had to learn that life is not safe, not even in her small Kansas hometown of Pratt. After having a vision, strange horse-women begin haunting her dreams, calling her to obey the will of the Cosmic Wind. Balancing good and evil, the Cosmic Wind recruits Yonni to stand against greedy men who desire nothing but power and money, no matter who they harm in the process. When her friends' homes are in danger because of the greedy mayor's real estate scam, Yonni must use her abilities to control the wind to help her friends save their homes. In the process, though, she exposes her family to danger, and must decide what is more important: justice or her family.

You have subscribed to alerts for Ruth Heflin.

You have been added to Ruth Heflin's favorite list.

You can also sign-up to receive email notifications whenever Ruth Heflin releases a new book.