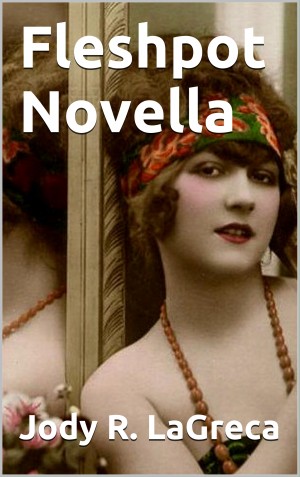 By Jody R. LaGreca
Fleshpot Novella is Part One in my novel Fleshpot. I have published this segment as a novella since it stands on its own and it had been my intention prior to adding Part Two to the novel version. It is ideal for those for enjoy the power and satisfaction of reading a novella. Fleshpot is a saga about love’s dark side, the hypocrisies of married life, and the double headed coin of sin. More
In 1995, client Raymond Brent falls in love at first sight with Maria Cezaro, a beautiful eighteen-year-old prostitute, who works in her mother Madame Colette’s bordello in Spanish Harlem. The forty-year-old wealthy furrier takes a fostering role in Maria’s life, in the hope of purifying her and teaching her the meaning of love. He offers Maria the position of companion for his dying wife in his opulent Sands Point estate on Long Island, when in truth — Ray is grooming Maria as his future wife — aware his wife Elizabeth will soon be dead.

In the meantime, Ray frequents the bordello in a twisted morality where he abstains from intimacy with Maria in order to win her heart and trust. Does Maria surrender to Ray’s seduction? Or will Elizabeth’s agenda of persuading Maria to honor her memory once she is gone influence her young companion’s destiny?

Love. Seduction. Money. Destiny.
Discover what happens when a morally twisted plan clashes with one driven by virtue in Fleshpot Novella: Book One.

Former fashion designer of couture evening wear and accessories, Jody R. LaGreca is now an award-winning poet and the author of eight novels. Her books "Afternoon Tea" and "The Gloaming" received five star reviews from Midwest Book Review. Her first book "Afternoon Tea" is a classic piece which has been compared to "Wuthering Heights." Her novels appeal to both men and women and are "intense and satisfying" with unexpected twists and turns. Jody LaGreca has a BA in Writing/English from Queens College University of New York. She also graduated Phi Theta Kappa Magna Cum Laude in Fashion Apparel Design from NCC, State University of New York. Her poetry is internationally published in magazines and anthologies, including "Midstream." Her fashion designs have been on the covers of the "National Fashion & Boutique Show" trade magazine in New York City, as well as in "Mademoiselle", "Women's Wear Daily," and "New York Post." She has been a featured author at the International Women's Writing Guild, Big Apple Conference in New York City. She has been writing since the age of seven. Jody LaGreca was born in Sea Gate, Brooklyn, New York's first gated community. 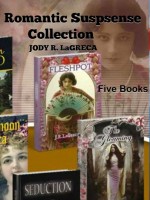 You have subscribed to alerts for Jody R. LaGreca.

You have been added to Jody R. LaGreca's favorite list.

You can also sign-up to receive email notifications whenever Jody R. LaGreca releases a new book.