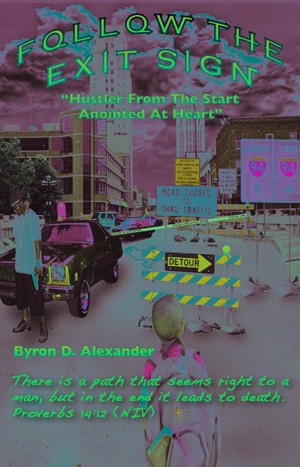 By Byron Alexander
Rated 5.00/5 based on 1 reviews
Follow The Exit Sign is the story of one exceptional blessed young man; who chooses to live the life of a hustler. Early on in life, Shakeem Allen knows that he is called to be a mighty man of God. Instead of following The Lord's plan, Shakeem walks down the same path that seems right to most black men. Knowing that the road leads to destruction, Shakeem thinks he can escape the law scott free. More
In the United States today, there are millions of young men and women who think that selling drugs is the only way to make money. There are also billions of people all around the world who think that selling drugs is the thing to do, which couldn’t be any further from the truth. Just take a listen to today’s rap songs; the hottest rappers are the ones whose lyrics are only about selling drugs, aimlessly spending money and having sex with random women. In my opinion, someone has to stand up and tell the world the truth about the drug game. Follow the Exit Sign does just that!

Early on in life, Shakeem Allen knows he is called to minister the word of God. For some strange reason along the journey, he thinks that he can use an illegal street hustle to perfect God’s destiny for his life. Instead of walking in the power of the Lord that he learned so well throughout his childhood years, Shakeem chooses to live a double life and takes penitentiary chances daily. Even though the Lord had blessed Shakeem with the ability to start his own business and buy his first property by 19, Shakeem takes another route from the Lords plan of being a living testimony of how good Jesus truly is. The Lord blesses Shakeem to be a blessing to others but he hoards those blessings to himself with plans of becoming rich.
Shakeem chases the illegal money with hopes that it can be a short cut (through the process required) in executing the Lord’s defined plan. In Follow the Exit Sign, Shakeem gets caught up in several illegal endeavors while maintaining a shaky relationship with the Lord. Even though this novel is about the street life, its message is diverse and applicable to the struggles that many others face. Starting out in the weed game, Shakeem’s lust for fast cash never stops growing.

This novel is the first edition of the Follow the Exit Sign series, where Shakeem Allen runs into brick wall after brick wall trying to find the recipe for instant riches. The cycle continues as Shakeem runs from police, robbers and snakes pretending to be his friends. Will he learn and turn to God, be found dead on the side of the road like his father, or end up in prison with a life sentence like his older brother? Only time will tell, but he must find his way quickly because his town is too small to be a career criminal!

Author Bio
As a twenty six year old businessman, becoming an author was the last thing that I ever thought of being. From a very young age (6), I knew that I was called by the Lord to play a very important role in the glorification of his kingdom. Only now after all my trials and tribulations, do I realize that every thing that I have experienced must be used as a tool to shine God’s light on others like myself, and show the power of Jesus’ unchanging hand. On December 19, 1985 after eighteen hours of labor my mother and father welcomed me into the world. Our happy family was short lived; my father Byron Qualls was killed in cold blood while being robbed by someone he thought to be a close friend. The date that tragedy struck was July 14, 1986 and I was seven months old, now without a father.
As a single mother my mom did her best job of raising me into a man until she opted out for some help. A few days after my preschool graduation I had the honor of being the ring bearer in an accident waiting to happen, which was when my mother got married after a six month relationship with a man who had just completed a fifteen year prison term. Less than one year later I was Baptized and filled with the Holy Ghost after being introduced to the Jesus three years earlier. The power of the blood of Jesus was the only thing that could protect me from the wrath of my hateful, hypocritical step father. From day one my step father abused me and my mother; growing up under the extreme and abusive conditions was one of the most influential experiences of my life.
My overaggressive step father is who saved me from the trap that I was headed for. Throughout my childhood years, I sat back and watched my mother slave in a factory for sometimes sixteen hours a day, 7 days a week. While my mother worked, her husband stayed at home on the phone counseling and preaching to people about the gospel of Jesus Christ but never got his life right. “Bogus Bee” as I call him in my book was one of the lead ministers in our church; little did I know along with everyone else that he was an undercover heroin addict. By age seven when I was only in the second grade I was moved from the cities roughest elementary to a suburban school.
My childhood consisted of the same old thing, school, church and living in a household where I was forced to walk on eggshells from the fear of getting knocked out. In 2004 I graduated from high school and one year later at age 19 I bought my first property and started my own business. Opposed to sticking to God’s plan I choose the street life which resulted in me racking up eleven misdemeanors before receiving my first felony conviction in June of 2011.

Amazing book by an amazing man! :)

You have subscribed to alerts for Byron Alexander.

You have been added to Byron Alexander's favorite list.

You can also sign-up to receive email notifications whenever Byron Alexander releases a new book.