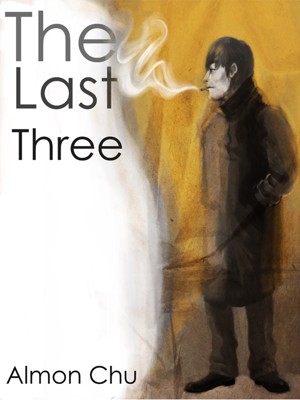 By Almon Chu
Rated 5.00/5 based on 1 reviews
"'Just three more stops,' I thought to myself. I gripped my knife, the handle digging into my flesh. I closed my eyes and tried to think of Eris."

A descent down the path of self-destruction, does salvation lie around the corner or is it merely an illusion? The Last Three is a captivating story of a lost soul on the streets of a modern dystopia.
Download: epub mobi (Kindle) pdf more Online Reader
rtf lrf pdb txt
Price: Free! USD
Add to Library
Create Widget
Tags: fiction dystopia noir selfdestruction nonfictional fiction
About Almon Chu

Born and raised in the small town of Toronto, currently writing out of Vancouver BC.

This book hits you like a subway train. It starts abruptly, descends into the dark tunnel that is Jon’s life and leaves you stranded.

Jon is a victim of the city - the smoky, gritty, seedy-eyed mass of trash and wealth, immigrants and criminals. He leads a solitary life after his high-school sweetheart, Eris, heads off to pursue a college degree. Deeply committed, Jon pays for all her expenses, working a dishonest job and living off white rice and cigarettes. He keeps a knife in his pocket and fights the itch in his brain - that little voice who keeps telling him something is wrong.

Jon struggles to maintain hope in his malnourished, lonesome life. There is a photo of Eris is taped to his bedroom wall. He saves a little from every paycheck to one day quit his job, leave his circle of mediocre friends, and move far away from the city that is licking its lips, ready to swallow him whole. His dreams become compromised when the city suddenly begins to interfere with Jon’s plans.

The city is a malicious character in The Last Three, which grows and spreads like fungus. It thrives off the misdoings of street thugs, the crowd of numb subway commuters, the peddlers, salesmen and runaways. Chu writes with such microscopic detail, presenting amazing descriptive passages that invade all five senses. How else would you describe a hole-in-the-wall sushi bar on the outskirts of Chinatown?

“A brightly lit restaurant illuminated the dim alley-way and all its blemishes: broken shards of glass and plastic, pools of black water, forgotten garbage heaps and the occasional forgotten person. ‘Open’ a neon sign flashed repetitively. Streaks and oily finger prints marred the restaurant windows. The restaurant's plastic strip sign appeared to have been smashed by several bricks, though the sign's light was still lit. Nothing remained of the restaurant's name, though the very end of the sign was still intact. “ushi” it read.” -- Almon Chu

The Last Three reminds me of a modern day Edgar Allen Poe novella. It is a beautifully grungy tale of loss, betrayal, failed romance and utter defeat. Chu takes you into Jon’s world and peels back the tattered curtains. Reading his work was like inhaling a healthy dose of Dictionary soup. I loved the words, metaphors, interrupted dialogue, police sirens, cell phone blares, run-on sentences and one word sentences. It was visual food, a genuine piece worth reading.

You have subscribed to alerts for Almon Chu.

You have been added to Almon Chu's favorite list.

You can also sign-up to receive email notifications whenever Almon Chu releases a new book.