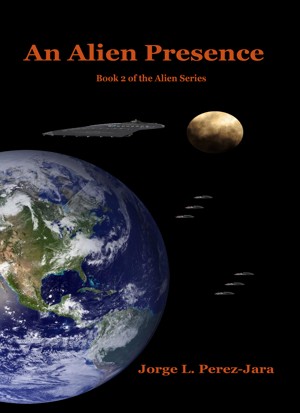 By Jorge Perez-Jara
Tensions on earth have finally reached the boiling point and humanity is at war. But there is more to earth's problems, since they also have to deal with alien visitors to the solar system. Will the aliens side with a specific government on earth or will they simply allow mankind to destroy themselves? More
Humanity had finally received an answer to the age old question. Are we truly alone? The answer was an undeniable and resounding NO! Unfortunately, Earth’s First Contact with an alien civilization has been interrupted by human quarrelling and mistrust. Hostilities have broken out above and on the surface of Earth. The alien visitors have arrived in a time of high tension and have front row seats to humanity’s oldest profession. WAR!
Major Myles Webb of the American Federated States Space Marines is once again caught between his loyalty to the AFS and the trust the aliens have placed upon him, which he dares not betray. He is the only person that has full access to the aliens, who now call Mars home. He also has their full trust in being the mediator between Humanity and the Hee’Umana by being appointed as Earth’s Ambassador.
But with hostilities breaking out on the planet’s surface, he must also balance his responsibilities of being an AFS Space Marine and newly appointed Sub-Commander within the alien ranks. A role he was given without preamble and is expected to perform, while the aliens remain within the Solar System. He also has to figure out why the aliens are in a hurry to increase their numbers and military strength? All of their preparations suggest that they are worried about something, an unknown which they refuse to share the secret with their human counterparts.
All Major Webb knows, it is something that even frightens their current visitors—the Hee’Umana. An alien race that knows all about war and is harden to face the unknown, but this unforeseen force is even something they agonize about. He may not know what it is, but he is certain of one thing. They will face it together. But before they can even do that, they have to resolve the tension on the planet’s surface.

Jorge L. Perez-Jara graduated from Mesa High School in Mesa, Arizona in 1986. After graduation, he attended Arizona State University and joined the United States Air Force shortly afterwards. He is a military Veteran who served during the 1990-91’ Gulf War “Desert Shield/Desert Storm” in the Middle East. He has traveled to many parts of the world, while he served in the U.S. Air Force and has experienced and done many things. While he served on Active Duty, he had the opportunity to interact with different people and cultures. He was Honorably Discharged and now enjoys spending his time writing, coaching youth sports and researching ancient cultures. His writings consist of personal experiences as well as Science Fiction. He is married with six children and is currently living abroad.

Also in Series: An Alien

You have subscribed to alerts for Jorge Perez-Jara.

You have been added to Jorge Perez-Jara's favorite list.

You can also sign-up to receive email notifications whenever Jorge Perez-Jara releases a new book.