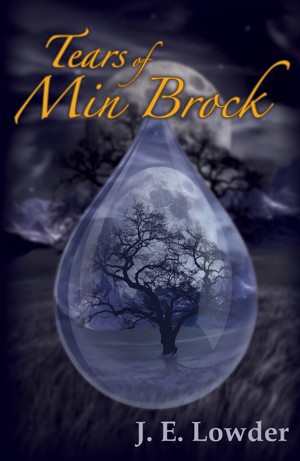 By J.E. Lowder
Rated 5.00/5 based on 1 reviews
Tears of Min Brock is a high fantasy that follows a teenage boy and girl's courageous journey to discover if the King of Claire still exists. Mysterious creatures, heroes and villains permeate the story as do two identical whispers that vie for their allegiance. But which is telling the truth? Tears of Min Brock is a beautiful, fast-paced tale of intrigue that will appeal to readers of all ages. More
Book #1 in the fantasy fiction War of Whispers Series. When Elabea, a girl of fourteen summers, hears a whisper calling her name, she asks, “Is this proof that the land of Claire wasn’t destroyed in the Dark War?” But her question ignites fear in her village. “The Oracles of the Cauldron forbid you to speak…the name! Death will come! We will be cursed!” Furthermore, when her best friend, Galadin, rallies beside her, the villagers divulge a dark secret: their fathers were the only survivors of the massacre at Min Brock. Forged as outcasts of their own homes and village, they fear the worst when the Cauldron sends warriors to destroy them. Desperate, they flee to Claire where Elabea is promised to become an all-powerful storyteller and Galadin a great warrior. But does Claire exist? And if it does, will it be an ally or a greater foe? Battling whispers, warriors and mysterious creatures, Elabea and Galadin must also contend with the darker questions about their fathers’ past and the… Tears of Min Brock.

I've played bass for Shania Twain, had a black rhino charge me while on safari, and I've been in the Oval Office. In high school, I went backstage to interview groups like Bob Seger, Rush and Kansas, sorta like "Almost Famous" but without Kate Hudson! As an author, I draw from all these experiences (and then some) when crafting my stories. The quote that sums me up the best is by G.K. Chesterton: "Nay, the really sane man know that he has a touch of the madman."

I'm married, the father of four wonderful children, and a proud grandfather. I currently live near Nashville, TN where I write, bike and am always on the prowl for adventure and stories.

When I first started to read this book, the first thing that came to my mind was Chronicles of Narnia. I read this book in a Christian attitude and one could see a Christian outlay to the plot, just as there is to Narnia. The main plot of the story revolves around the two main characters ,teenagers Elabea and Galadin, but the rest of the characters lend their own special element to the story. Raised in an atmosphere after what was known as the dark war, children were not allowed to learn how to read under the rules of Cauldron. Under the authority of the Cauldron the people could not speak about anything that happen before time or allow their children to ask questions. They heard everything. When Elabea hears the whisper of the Only call her name, the battle of the whispers begins. As Elabea and Galadin make a mistake and take down a notice that was place on the doors of their homes troubles begin. Now they are on the run back to the village of Claire that is said to have been destroyed. This is when Elabea learns she is to be a storyteller and Galadin a great warrior. As they run for their lives the Cauldron is out to capture and destroy them. When they learn the truth that the Cauldron is the evil ones that have led the people to believe on them, fathers now plan to over thrown them and go back to what their life once was. Will Elabea and Galadin make it to Claire? Is the village still there or destroyed like the Caldron said. Will the fathers turn again and go to war as the whispers of Good and Evil are once again heard throughout the land?

I know that all teens will enjoy this book just as many adults will .There is so much to this story that I just cover a miniscule of it trying not to give too much away but just enough to make it interesting. What started out as bed time stories for his children turned into these novel years later? I will wait patiently for book 2 of the series.

You have subscribed to alerts for J.E. Lowder.

You have been added to J.E. Lowder's favorite list.

You can also sign-up to receive email notifications whenever J.E. Lowder releases a new book.