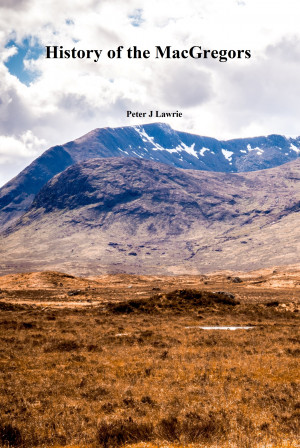 History of the MacGregors

By Peter John Lawrie
The History of the MacGregor Clan in the Scottish Highlands. This book covers aspects of the history of the Clan Gregor from its origin to the last Jacobite Rising of 1745. More
This book covers aspects of the history of the Clan Gregor in the Highlands of Scotland from its origin to the Last Jacobite Rising of 1745-6. The proscription of the Clan Gregor by the Crown is unique in Scotland. From 1603 until 1774, (except for 1661 to 1689) it was illegal in Scotland to be called Gregor or MacGregor. Between 1603 and 1611 at least 80 of the clan were legally executed. It is impossible to determine how many others died in the hills. The terms of the proscription forgave anyone who killed a MacGregor and indeed rewarded the killer with the possessions of his victim.The proscription came about after a fifty year war with and entirely caused by the Clan Campbell. Following the Battle of Glen Fruin in February 1603, King James VI issued orders that the “detestable race of Clangregour be extirpat and utterlie ruttit out”.
An account of the chiefs follows the early history of the Clan, Due to its circumstances, the clan frequently came to the attention of the state, so that much of the book is about conflict, especially the one-sided Battle of Glen Fruin where just two MacGregors died in a victory in which 140 of their enemies lost their lives. Strangely, as the proscription was imposed by a Stewart monarch, the descendants of the survivors would go on to support the Stewart dynasty during the Wars of Covenant and civil wars from 1638 to 1660 and in every Jacobite Rising, 1689, 1715, 1719 and 1745-46.
Despite the intention of King James that the race should be “extirpat”, there are very many MacGregors living on every continent today. It is to be hoped that some of them may find this study of value.
Since 1995, the author has been Vice-chairman of the Clan Gregor Society and editor of the Society Newsletter. For the avoidance of doubt, the opinions and views expressed herein are those of the author and not necessarily those of the Clan Gregor Society
The following chapters are the result of many years of study. Most have been published online on my personal glendiscovery website. I have been encouraged to take a few of the chapters most relevant to the Clan Gregor and edit them into a book under my own name, rather than that of the Clan Gregor Society.
Available ebook formats: epub mobi pdf lrf pdb txt html
First 10% Sample: epub mobi (Kindle) lrf more Online Reader
pdb
You set the price! USD
Buy Add to Library Give as a Gift
How gifting works
Create Widget
Tags: highlands of scotland macgregor clan scotland clans jacobite risings rob roy macgregor
About Peter John Lawrie

Peter grew up in Inverness, the Highland capital. He studied Science and Scottish History at the University of St Andrews. World famous as the home of golf, St Andrews is also home to Scotland's oldest University, founded in 1411. Peter took a part-time degree in Humanities with History at the Open University during the 1990s. This course included 'Modern Scottish History since 1707' and 'Family and Community History', which allowed the use of the substantial documentary sources collected over the years on some of his family origins in the Highlands. He then joined the Masters degree course run by the History department of the University of Dundee and graduated in 2003 with an MPhil for a dissertation on the Clan Gregor between 1583 and 1611. In 2004 he gained a certificate in Scottish Field Archaeology at the University of Glasgow and is a member of the Association of Certified Field Archaeologists. For many years he has been a member of the Scottish Genealogy Society, the Scottish History Society and is a Fellow of the Society of Antiquaries of Scotland.
Peter's interest in genealogy led to him joining the Clan Gregor Society, where he has been, for many years, Vice-Chairman of Council and editor of the Society's Newsletter. He has written a number of papers for the Society including 'the early history of the Clan Gregor' and 'The Clan Gregor in the 1745 rising'. The MacGregor connection comes through his father's mother. After many years of genealogical research he is confident of his descent from Gregor ghlun dubh MacGregor of Glengyle, nephew of Rob Roy MacGregor. He is equally as proud of his descent from many other Highland clans. Peter has been involved in the MacGregor DNA project through FamilyTreeDNA of Arizona. As the Y-chromosome carries the family tree interest of DNA, Peter's nearest male MacGregor relative took the test, confirming his shared DNA with the Clan chief, Sir Malcolm MacGregor of MacGregor. A fascinating journey of discovery is in its early stages with the DNA project, illustrating both the genetic diversity within the clan, and the relationship of the leading families of Clan Gregor to other clans of Dalriadic origin.
Future historical novels are being considered which deal with the lives of Gregor Roy MacGregor, executed in 1571 and Alasdair Roy MacGregor, his son and successor as Clan Chief, who was executed in 1604 after the Battle of Glen Fruin.

Reviews of History of the MacGregors by Peter John Lawrie

You have subscribed to alerts for Peter John Lawrie.

You have been added to Peter John Lawrie's favorite list.

You can also sign-up to receive email notifications whenever Peter John Lawrie releases a new book.