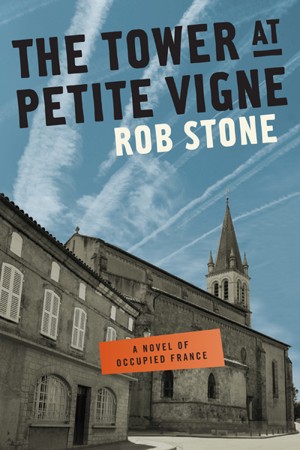 The Tower at Petite Vigne

By Rob Stone
Rated 5.00/5 based on 1 reviews
When a German construction unit arrives at the French village of Petite Vigne to build a flak battery, its inhabitants are forced to face the war they had kept at bay for four years. Will they settle for an undeclared truce with the occupiers? Opt to resist? Or will collaborators rise from their midst? More
It is the spring of 1943. American and British bombers pound Germany around the clock, disrupting her industry, smashing her transportation network, and driving her urban population underground. The Third Reich rightly interprets the aerial campaign as a prelude to the long-anticipated invasion of France.

That May an Organization Todt construction unit wheels into the cobblestone square of the ancient French village of Petite Vigne. Its laborers are to build a flak battery that will help counter the Allies’ growing might.

Now the conflict that Petite Vigne’s inhabitants had avoided for so long erupts into their quiet lives. Fault lines sunder the community: most people settle for an undeclared truce with the invaders; a handful opts to resist; and one becomes a collaborator. When an escaped French prisoner of war returns home to challenge the agent from London who comes to train volunteers for a D-Day attack on the flak site, matters come to a head.

The Germans’ situation is no less fraught with difficulty. The construction foreman sympathizes with the mayor’s high wire act of maintaining peace between the French and their conquerors. A series of incidents lead to the foreman being accused of letting the locals forget that they are subjects of the Reich. The opposition the foreman faces from his assistant, the commander of the flak battery, and a ruthless military policeman threaten to destroy him.

The Tower at Petite Vigne is a fast-paced, absorbing novel about the choices people make when they find themselves caught up in the confusion and chaos of war.

Rob Stone and NFL great Joe Namath both hail from Beaver Falls, Pennsylvania. Rob’s family moved to Florida when he was an adolescent. After attending Palm Beach Atlantic College in West Palm Beach, Rob relocated to Ann Arbor, Michigan, to pursue graduate studies at the University of Michigan. Rob’s a dyed-in-the-wool fan of both the Pittsburgh Steelers and the Michigan Wolverines.

A life-long interest in military history, combined with 30 years’ experience in the publishing field, inspired Rob to take the plunge and start writing in the Nineties. As an author, Rob’s interests are wide-ranging: in addition to The Tower at Petite Vigne, he is working on a murder mystery set in the American Civil War and the first volume of a projected science fiction trilogy.

Rob possesses a rich vocabulary and a lively imagination. These attributes fuel his passion for describing a person or situation with precision, choosing the right words to tell the story. His desire is to tell stories with prose that catches the eye and engages the mind.

Rob is the founder and owner of Chosen Word Copywriting and Editorial Services (www.chosenword.biz). His hobbies include collecting commemorative stamps and coins. And, for over two decades he has been a Federal infantry American Civil War re-enactor.

There is not much American literature about life under occupation, a consequence of our fortunate history. Perhaps the best known would be The Secret of Santa Victoria, about Italians under German occupation hiding their large store of wine.
This novel by Robert Stone plays out much more realistically, how do people react to being occupied? Who can you trust? If an opportunity comes to help with liberation who will step up despite the dangers?
This small quiet village has an opportunity to play a small part in the D-Day invasion by attacking German anti-aircraft defenses. A slow setup leads to a realistic conclusion.
Pro - the editing and writing and historical accuracy is much higher than many of the Ebooks I have purchased. Con - It could use a more vivid exciting portrayal of a POV character, which might run counter to the realism which is the main strength of this novel.
Recommended for fans of historical, military, and occupation fiction.

You have subscribed to alerts for Rob Stone.

You have been added to Rob Stone's favorite list.

You can also sign-up to receive email notifications whenever Rob Stone releases a new book.