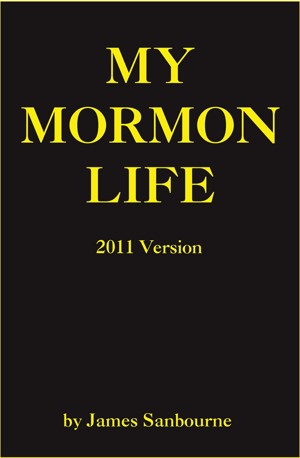 By James Sanbourne
My Mormon Life tells the story of a boy, raised as a Mormon, who struggles with the beliefs of the church, which seem in conflict with reality. Follow this boy's journey on a tour of Mormonism: baptism of the dead, Mormon underwear, golden plates, and polygamy. All aspects this religion that make it unique are explored, often to humorous effect, until, the young mind crashes into Mormon racism. More
In a deep torch lit cavern, beneath the Mormon temple, hundreds of barefoot, white clad youths wait in line to be plunged beneath the water in a bronze tank that rests on the backs of twelve gigantic bronze oxen. Each time they are lowered backwards into the water, a member of the Mormon priesthood evokes the name of a person who is dead.

My Mormon Life is the story of a boy, raised in the Mormon faith, who examines the beliefs of the church and comes to realize that what he is being taught by the church is not consistent with what seems to be the real world. In this process he takes the reader on the grand tour of Mormon beliefs, from baptism of the dead, to polygamy and Mormon underwear, survival food, and the separate policy toward Blacks. One by one the unique beliefs of Mormons are explored by the boy’s active mind, often leading to humorous conclusions. By following these explorations the reader will find the answers they are seeking about the Mormon Church and by the end of this story understand what it means to be a Mormon.

Ultimately the Mormon faith does not hold up to the scrutiny of this young boy’s mind and this leads to powerful questions about the whole process of forcing fanatical religious beliefs on the mind of a child.

The Mormons have been the focus of curiosity from the very beginning, and for some good reasons. They claim to have a living prophet who speaks directly with God, they teach that only Mormons can go to the Mormon heaven. They have practiced polygamy in the past, but now condemn it in this life—still believing there will be multiple wives in Mormon heaven. They believe that the very best of the Mormons will become gods.

My Mormon Life is a journey through this unique world. It answers the question: What is Mormonism?

You have subscribed to alerts for James Sanbourne.

You have been added to James Sanbourne's favorite list.

You can also sign-up to receive email notifications whenever James Sanbourne releases a new book.