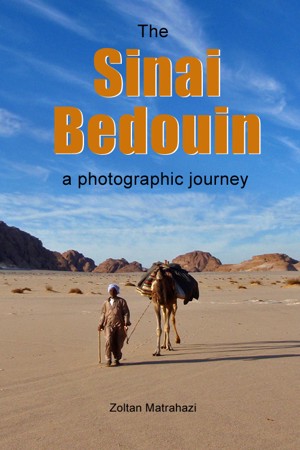 The Sinai Bedouin: a photographic journey

By Zoltan Matrahazi
The Sinai is a barren and inhospitable - but very diverse and stunningly beautiful - desert wilderness inhabited by nomadic Arab tribes, the Bedouin. Most of them are from the Arabian Peninsula originally, arriving in several waves before and after the Arab conquest. The Bedouin are now at a crossroad. This little ebook shows glimpses of their life and natural environment through 40 images.
Download: epub mobi (Kindle) pdf more Online Reader
lrf pdb
Price: Free! USD
Add to Library
Create Widget
Tags: nature middle east egypt photography camel culture desert arab mountains red sea bedouin sinai
About Zoltan Matrahazi

With roots in Hungary and Russia, Zoltan grew up in Budapest but spent many childhood summers in the Caucasus. He took to travelling as a young man and lived in several countries on four continents. He first visited the Sinai in 1992 and returned in 2005 to stay. Nature and culture have always been in his focus along his travels and he found both in and around St. Katherine. He spent most of his time between 2005 and 2016 living as part of the Bedouin community. Working as a freelance web specialist, he has created several publications and websites to promote the region and responsible tourism. He was also involved in restoring Bedouin gardens, and worked for an EU project mapping treks across South Sinai and training local Bedouin guides. Zoltan's photos and/or articles appeared in publications including Oasis Magazine, Eternal Egypt, Egypt Independent and Lonely Planet’s Discover Egypt.

You have subscribed to alerts for Zoltan Matrahazi.

You have been added to Zoltan Matrahazi's favorite list.

You can also sign-up to receive email notifications whenever Zoltan Matrahazi releases a new book.