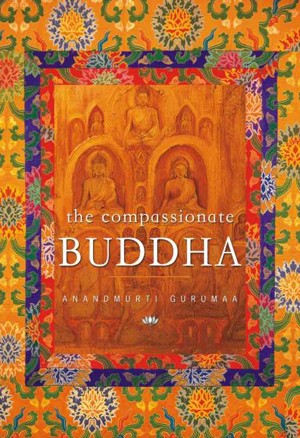 Most people would have probably heard the word ‘Buddha’, and again most would equate it to the prince Gautama Siddhartha, the founder of Buddhism. This ‘Buddha’ is well known to people from all parts of the world, given the large global following of Buddhism including the allied school of Zen Buddhism. However, the word ‘Buddha’ literally means ‘the enlightened one’. And moreover, we all have the potential of becoming a Buddha, or rather realising our Buddha nature.

There are several books readily available on Buddhism delving into all aspects – historical facts, spiritual teachings, sutras, light reading for the casual reader, and profound discussions for the more cerebrally inclined. Then what is different about this book, what can another author say that has not already been said, you may ask.

Well, this is no ordinary author. This is not another literary scholar who has studied the scriptures, interpreted the knowledge, and presented his or her own understanding of the scriptural texts. This is an enlightened master who has actually, literally, firsthand experienced the veritable truth – the same truth that was experienced by Gautama Siddhartha and all other enlightened masters. After all, truth is not of different kinds. There is only one universal truth. And the one who has experienced that truth, has shattered his ignorance forever, broken free of all bondages and delusions, is a Buddha.

Revered Anandmurti Gurumaa is one such living Buddha. So, in effect, a ‘Buddha’ has written about, not only the Buddha that Gautama Siddhartha was, but the Buddha that resides within all of us. It cannot get more authentic than that! Furthermore, the language is simple as this is a compilation of live discourses given to a gathering of masses from all walks of life.

In addition to this, there are references made to other enlightened masters from all parts of the world, other religions as well. And who can have a better authority to do so than Anandmurti Gurumaa – who, as she so emphatically states, is completely religion-less! Hence, it doesn’t matter at all whether the reader is a Christian, Buddhist, Hindu, Sikh, Muslim, Jew or indeed anyone else. This book is meant for all those who want to tread the journey from the Buddha without to within.

Indeed, what can be more valuable than guiding people towards permanent eradication of their ignorance and suffering? And that is what Anandmurti Gurumaa is doing – giving the greatest gift to mankind, by sharing her enlightenment.

An embodiment of love, grace, compassion, and empowered with the wisdom of the times, forward thinking and dynamic in her approach and outlook, Anandmurti Gurumaa stands as a constant source of inspiration for all. She is a source of light to those looking for an answer, peace, wisdom, and unconditional love. Defying definitions, pragmatic, realistic, of liberal views, she is open-minded like sky and intense like space.

Anandmurti Gurumaa was born on 8th April 1966. She had a wonderful childhood - when other children were learning nursery rhymes, she was listening to the philosophy of Vedanta. While other children dreamt of dolls and cars, she was learning the art of awakening. She was always seen meditating or sitting in silence.

She travelled in different parts of India, finally settling in Rishikesh - a holy city on the banks of the Ganges. While in Rishikesh, she went into silence and wanted to remain in this state forever. However, the world needed her presence to show light to the mankind groping in dark; seekers were flocking from everywhere seeking guidance. Out of her compassion for humanity she came out of silence and began to show the way.

At a very early age, life groomed her to be a master and a guide to seekers. Soon the fragrance of her spirituality spread and people from all over started coming to her seeking knowledge and guidance.

She started travelling to address conferences, meet people and to give them guidance. Later she started her meditation retreats which gave her a working ground. Thousands of people would come to unlearn the worldly ways; to rise above dogmas and doctrines of religion. She simplified meditation for the masses and made it of such ease that no one ever felt that this path was for a chosen few only.

As fish to water, so did poetry come naturally to her. Anandmurti Gurumaa has written hundreds of poems. She has also set them to music and sung them in her mellifluous voice.

Anandmurti Gurumaa teaches the essential precepts that we must understand and internalize, if we are to progress on the path of spiritual understanding. A pragmatic approach of her teachings empowers the seeker with the wisdom to live with absolution. With her characteristic humility, Anandmurti Gurumaa says, “I have nothing new to offer in terms of words; but much to offer in terms of the essence of truth.”

Redefining spirituality: Anandmurti Gurumaa says, “The Spiritual path is a warrior’s path where you have to wage a war against your own darkness, your own ignorance – not to fight with your own mind but to understand it so as to transgress it. It is like the seed that is always there but flowers only in the right climate, rich soil and with the loving nurturing of a gardener.”

Gurumaa says she does not belong to any one tradition, religion, path or label. She considers herself a citizen of world and is not limited by narrow considerations. She is a free-spirited, transendentalist and is carving out a path-less path for seekers. She says that no guru can grant you enlightenment; no master can awaken your kundalini; one has to toil hard oneself in the presence of the master- but without making the effort seem a strain. Seek, but with patience; meditate, but without any goal; sharpen your awareness so that you rise above the ‘me-mine-I’ syndrome of identification with the self.

Today Anandmurti Gurumaa resides in a beautiful ashram in Gannaur, Haryana, India. Ever welcoming to seekers; ever inviting to all; a hard task master who will not appease your ego, Gurumaa says, “People do not need a living guru; they need a look-alike guru, a toy. As one has to surrender totally to the guru, people, who love their selves so much, find it difficult to do so. Therefore most prefer to stay away!”

Anandmurti Gurumaa is a living master who is so ordinary in her extraordinariness! She is a challenge to the intellect, a pleasing sight to the eyes, humorous, and a lively new age Buddha.

You can also sign-up to receive email notifications whenever Anandmurti Gurumaa releases a new book.