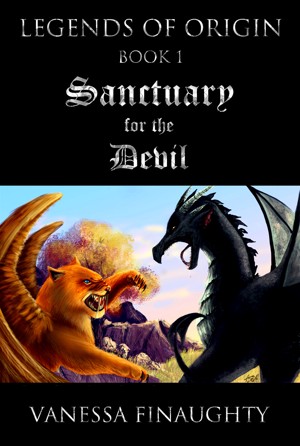 Legends of Origin 1 - Sanctuary for the Devil

Liam teams up with Arthean, a Tridorian monk with a dark past and a heart of gold. At first glance, the two seem to be polar opposites, but are they really that different? Together with the monk’s Ilanenorian friends – a strange race of people who live above the clouds – Liam continues his search for the source of everything, which he believes will be found in the Garden of Origin. However, Sah, the power-hungry ruler who hunts Liam, searches for the garden, too. The race is on to see who will get there first and if Liam can survive long enough to fulfil his goal.

On the run, with traitors in their midst and death-breathing dragons on their tail, it’s anybody’s guess if good will prevail or if the amnesiac Devil who possesses Liam’s friend, Joshua, will gain the upper hand. Will Liam find the Creator he seeks? Will the Ilanenorians’ Earth Magic and the winged ryokin’s aid be enough? Will Liam be enough?
Download: epub mobi (Kindle) pdf more Online Reader
rtf lrf pdb txt
Price: Free! USD
Add to Library
Create Widget
Tags: garden of eden scifi fantasy origins of existence origins story human race origins
About Vanessa Finaughty

Also in Series: Legends of Origin

I got lost in Vanessa’s imagination and so will you. Loved it!

I read this book over a week of bedtimes, and it kept me gripped the whole time. The concept of the story is huge --a constant battle between good and evil-- and sometimes more than my cynical brain would accept, but the characters carry it forwards relentlessly, the writing is superb, events flow, dialogue is natural, and the descriptions are vivid. I grew to like the main characters, to worry about their safety, to feel their emotions.

I certainly recommend this book and this author to anyone who is looking for a good, meaty book to read.

Legends of Origin: Sanctuary for the Devil by Vanessa Finaughty - 5/5 stars

How did it start? Upon picking up this book I was immediately transported into a vast surreal world. I loved every moment of it. The snow falling down on the main character painted a very picturesque scene. I hoped the rest of the book would be this illustrated and would have background settings as unique and original.

0% - 80% Putting this book down never crossed my mind. The main characters were described very well. We learnt much about them: Liam, the defiant and insecure, but brave and determined person on a new planet, tasked with finding the Garden of Origin, where all humans were thought to have originated from. Chased by evil forces, he stumbles towards a monastery, where he meets Arthean. Arthean is incorruptible and protective, but also downright nosy and curious. The clash between these characters, and the ensuing adventure brought into being by external forces, is a joy to read.

The visual environments were well described. The character interaction pushed the story forward mainly, but it was done very tidily. There were no gaping holes or unusual happenstances in this story. The author has strong control over her characters and their limitations. Definitely the most consistent story I have read so far. Up to 30% through the story I was totally engaged. Around 50% it becomes interesting; there is more at stake than the reader at first is led to believe. At 80% I was awaiting the truth; what is the Garden of Origin?

Overall The most consistent and high quality book I have ever read by an indie author. I have read great books by indie authors where I have considered reading their second to a series. But this author made me wonder what other types of books she writes. The conclusion had slightly less impact than I had hoped. I felt some of the major events were explained away at the end rather than explained. The second book will likely answer most of the lingering questions. I’m not a huge fan of religious books; I picked this one up for its speculative nature; but this was a very engaging and enjoyable read. I recommend for fantasy adventure lovers everywhere. The unique angle is the origins of humanity, and the powerful bonds between the characters. This book is sublime. I would definitely consider looking into her other works.

A pretty nice story, enjoyed it.

Vanessa, Glenn here. This was an outstanding story! Not just okay, not simply good, nor even really good... but outstanding! I would love to fly on a Ryokin myself, and fight the good fight. Speaking of fighting, the fight scenes in chapters 19 and 20 were great! I could not stop reading, the action was fast and furious, with so much going on, I actually found myself holding my breath! For anyone who has not read this story, I would highly recommend you download a copy NOW, read it, then tell everyone you know to get their own copy... it's that good! I can't wait for book two!

(reviewed 42 days after purchase)
GlennAndSasha Gabriel reviewed on Dec. 23, 2011
(no rating)
We've got a real winner here! This writing is absolute genius and I loved every minute of it!
Magical... wondrous... takes-your-breath-away writing!
This is a powerful writer and great story teller!
WOW! Loved it (can you tell?)
Thanks for an amazing read!
Sasha

An utterly delightful read! The characters are delightfully flawed;, their observations of the world they live in are often laced with a unique dry wit that is characteristic of Vanessa’s unique writing style. I found it well written and absolutely loved the characters, who are all so terribly real and so very human, with all the faults, failings and flaws that one could expect to find in the average Joe who just happens to find himself in extraordinary circumstances. The story flowed very easily, making it a fun, easy to read novel. Fast paced, interesting and often touching on themes that every reader can easily identify with and may often have secretly wondered about, I can highly recommend a trip to Tridor Monastery to visit with Liam and Arthean as they take their first steps to discover the legendary Garden of Origin.
Whether flying with the intriguing ryokin, traversing the catacombs that exist beneath the peaceful monastery, or facing the deadly dragons whothat fight on the dark side, you’ll be on the edge of your seat until the last page.

When Liam travels to an alien world in search of the Garden of Eden, which he believes holds the answers to the mystery of mankind’s origins, he finds himself caught up in a battle supreme between good and evil. A courageous monk helps him on his quest, but his companion and friend, Joshua, falls prey to the evil machinations of the land’s ruler, who is in league with Lucifer himself.

In this strange world, Liam discovers wondrous magical beasts, some of which help him and others that fight on the side of evil, as well as supernatural companions who offer their aid. The Garden of Origin, as it is known on this world, is a mythical place whose existence is as steeped in legend as it is on Earth, yet he must find and enter it if he is to succeed in saving the world, and possibly the universe, from the Devil.

In Sanctuary for the Devil, Finaughty takes her readers on a rip-roaring quest through a world much like our own, only with magical marvels that spice up an already scintillating story and make it a genuine page-turner. Thrills, adventure and mysteries abound in a tantalising tale that is only the first instalment of a soon to be penned series. My only gripe is the lack of romance, but for those who revel in fantasy adventure, the almost all-male cast of characters will delight and divert.