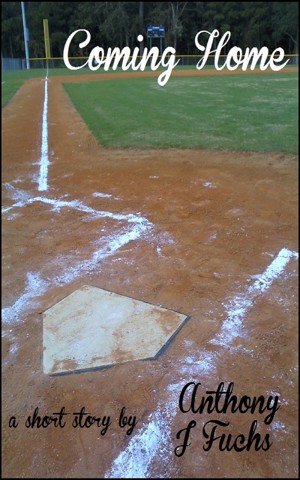 By Anthony J Fuchs
When the World Series is cancelled for the first time in 90 years, Mike Everett organizes a friendly pick-up game to get his baseball fix. But 42 innings into a deadlocked grudge-match, a fortunate accident is going to give him a new insight into the meaning of the game.

I am a Philadelphian by birth, a North Carolinian by choice, and a writer by nature. And I have baseball in my blood, having come into this world right around the time that Manny Trillo hit that famous single to drive in Del Unser and give the Phillies a 4-3 lead in Game 5 of the World Series.

I have been a teller of stories for as long as I have been able to brandish the force of language. One of my clearest, earliest memories is of watching Michael J. Fox on a 40-foot movie screen as he pushed that Delorean up to 88 miles-and-hour and barreled into the past on a pair of flaming tiretracks.

A few years later, I went to a sleepover birthday party at a classmate's apartment, and as midnight gave way to the next day, those of us who dared to brave the darkness began telling horror stories, each determined to terrify everyone else. The next afternoon, my mother received a phone call from my friend's mother: whatever tale I had spun had given him nightmares.

Since that day, I have never stopped chasing the intoxicating thrill that comes from the power of fiction. He is the author of "The Danger of Being Me," as well as a growing body of short fiction and poetry. You can contact me at tonyfuchs@hotmail.com, or follow me at www.facebook.com/anthonyjfuchs

You have subscribed to alerts for Anthony J Fuchs.

You have been added to Anthony J Fuchs's favorite list.

You can also sign-up to receive email notifications whenever Anthony J Fuchs releases a new book.