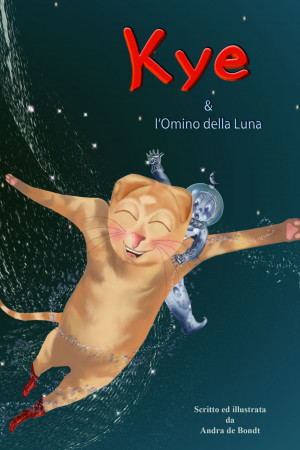 Andra Natascha de Bondt is an Author and Illustrator born and raised in Rotterdam, the Netherlands. Since 20216 she lives in Lucca, Italy. She studied two years at the Royal Academy of Art, the Hague (1983-1985). In Rome she attended the Nude life model- and engraving classes at the Academy of Fine Arts (1985 -1989).

In 2012, after a severe car accident, she set off on a journey to change her life and only do the things that makes her happy. She quit work and started creating 3D picture book apps, known as "Stories of Kye".
Awards:
2014: "Merit Award". International Competition Hiiibrand, Nanjing, China for the illustrations "Kye and the Kitty Boots" (Kye from Galloway) and "Kye and the Balloon".
2015: The 4th Digital Picture Book Special Award. Digital Ehon Award,Tokyo – Japan: for the app "Kye and Mrs Cottoncandy".

The stories have also been published as eBooks. The main character of her stories is her cat Kye. Her aim is to write stories for children to be read all over the world in their own language and to invest part of the proceeds to support projects for children living in the poor parts of the world via the Kye4Kids foundation.

The following stories are translated into multiple languages:
1. Kye and the Kitty Boots
2. Kye and Mrs Cottoncandy
3. Kye and the Balloon
4. Kye and the Man in the Moon 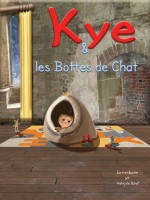 You have subscribed to alerts for Andra de Bondt.

You have been added to Andra de Bondt's favorite list.

You can also sign-up to receive email notifications whenever Andra de Bondt releases a new book.