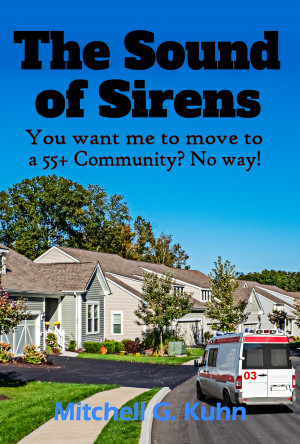 The Sound of Sirens

By Mitchell Kuhn
"The Sound of Sirens" is a humorous novel that captures the anxiety of a couple faced with the decision of moving from their home of thirty-five years and relocating to an active adult 55+ retirement community. The interaction between the couple themselves and with numerous sales agents will put a smile on your face. "Sirens" is both entertaining and educational. More
"The Sound of Sirens" is a humorous tale told by the primary character Mike Chandler a recently retired business executive, who after a long stressful career found peace and solace playing on his computer and/or watching television. His wife Helen feels isolated in their large suburban home where her social life has all but disappeared as a result of their life long friends relocating to various retirement communities around the country. Mike is dead set against such a move, viewing it as a giant step closer to the grave.
Mike and Helen struggle to come to a mutually agreeable solution spending countless hours visiting one retirement community after another. Their journey takes them from Connecticut to Florida and numerous stops in between. You guessed it. Mike finds objections everywhere and voices them non-stop to every sales agent. Then out of the blue all their plans take an unexpected turn.

Mitchell Kuhn is a retired seventy-three year old man living with his wife in bucolic Oxford, Connecticut.
As a young man he worked on and/or managed political campaigns for both Democrats and Republicans on a local, state, and national level. He served on several boards of political party organizations, and was appointed to numerous management positions within the New York City government. To this day he is an avid observer of our political system and its practitioners. Mitchell is not affiliated with any political party.
He earned a BA degree in History and Political Science, and an MBA degree in Hospital Administration. For nearly a quarter of a century he was the Executive Director of the First District Dental Society of New York.
Mitchell also was an Adjunct Associate Professor of Community Health and Health Administration, at Long Island University Graduate School.

You have subscribed to alerts for Mitchell Kuhn.

You have been added to Mitchell Kuhn's favorite list.

You can also sign-up to receive email notifications whenever Mitchell Kuhn releases a new book.