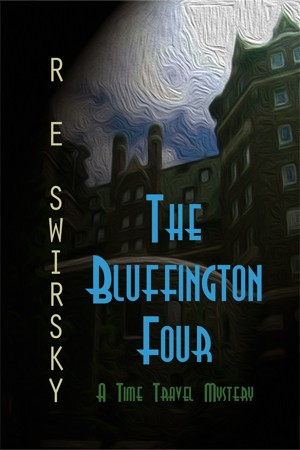 By R E Swirsky
An intriguing tale follows Francine Esterro as she is suddenly confronted with events from her past. It was decades ago that she and three other art students stumbled cross a device in an attic sending them all fatefully back in time.
The memories are painful as she is forced to relive the tragedies that occurred as they struggled to find their way home. Her only true love was lost in tragedy. More
Francine Esterro has lived peacefully in the small University town of Bluffington for many years. When she can't reach her long time and close friend in the house across the street she begins to worry. A few weeks pass with still no word of her friend when the house is suddenly sold and a stranger moves in. Francine becomes panicked as her thoughts go to a device that has been kept hidden away and guarded up in the attic of that house; a device that caused her and her friends so much suffering and tragedy many years ago.

The year was nineteen sixty-six. Francine is a young art student sharing the house with three other students. She and the others on a whim decided to explore the attic, where it is rumored a dead man was once found hanging. While searching the attic instead of finding anything to do with the dead man, they stumble across a strange device. After getting a sense that the device is something they should maybe not be touching, they decide to leave it alone, but it is already too late. The next morning they awake to find they have been sent back in time ten years.
As the four attempt to find a way to get back home, tempers flare and personalities soon divide the group. They struggle to work together as a group to find their way home, but not before they send themselves to multiple different periods in time where tradgedy continues to follow them, finally leaving one of them on the brink of death before they make it back to a time they belong.

Ray grew up in the small town of Kimberley in British Columbia before moving to Calgary Alberta to go to college. He has remained in the Calgary area ever since.

OUTSIDE FORCES
A secret vigilante organization named the Order has been formed to correct the errors of an imperfect justice system. Garrod Shaw, accused of killing his three young children and dumping their bodies in a lake has beaten his murder charge on a technicality. A Russian Diplomat, while driving impaired, runs down and kills a young woman and faces no penalty or prosecution after claiming diplomatic immunity. Both men are habitually dangerous and for the protection of all citizens, the Order believes it is time to remove these two once and for all.

BUMSTEAD’S WELL
The dare was simple. Spend one night down at the bottom of Bumstead's well. When Vincent's friends fail to return at the agreed time, Vincent finds himself trapped alone and reflecting on his short life.

WISH ME FROM THE WATER
A young boy commits suicide. The town folk believe it was another result of bullying but two brothers discover the truth and decide to take matters into their own hands. A tale of abuse, shame and standing up for what you believe is right.

EXTREME MALICE
If you could create the perfect murder and get away with it, would you? A young university student is charged with murder. His guitar string is wrapped around her neck. His shoe prints are left at the scene. Her earrings found under his bed. Her husband hundreds of miles away. The perfect murder? You be the judge.

THE BLUFFINGTON FOUR
A time travel mystery about four students who disappeared in the mid 1960s.

IN THE MIDST OF A PREDATOR
A very short psychological story. Bobby, a young boy alone at the fair grounds, finds comfort in a stranger who reaches out to him. Having the best night of his life, Bobby is unaware his new friend has something very different in store for him.

You have subscribed to alerts for R E Swirsky.

You have been added to R E Swirsky's favorite list.

You can also sign-up to receive email notifications whenever R E Swirsky releases a new book.