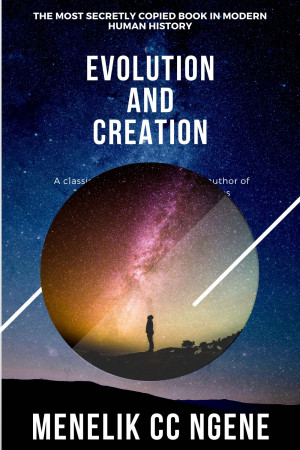 Evolution and Creation Different Sides of the Same Ignorance

By Menelik Cc Ngene
Since the world began, no one has show any proof of any dust made humans or monkeys currently birthing humans or evolving into humans.

In this classic blend of science,scriptures and common sense,biological scientist and retired missionary pastor MENELIK CC Ngene delivers new knowledge and proves that the theories of evolution an More
Scientific ignorance taught us to disrespect and abuse other humans because their ancestors used to be animals which evolved into humans,but no one has ever seen a monkey tail human tribe giving birth to human tribes.

Religious ignorance taught us to believe that God created humans from the dust of the earth, but no one has seen a dust made human population giving birth to humans.

Despite his still ongoing persecutions, Menelikcc still fights global injustices like a wind driven fire, cuts through their walls of fraud and corruption like an ultra high beam laser light and saved more humans, countries and global institutions in all continents than any human ever lived.

All Ambassadors of World Human Facility community WHF is Representation Diplomatic permanent of the European Union and United Nations protected by the Vienna Convention, populations must in all circumstances help them to realize their work in favor of the well-being of the populations.

By this way we inform you and confirm that in our status we are protected by the Convention of Vienna and benefit of one seat and vote in United Nations organization. 'Excerpted from the EU Lobby Facts website https://lobbyfacts.eu/representative/f5bc82d694544ed99ea21fddf1c73d8c

You have subscribed to alerts for Menelik Cc Ngene.

You have been added to Menelik Cc Ngene's favorite list.

You can also sign-up to receive email notifications whenever Menelik Cc Ngene releases a new book.