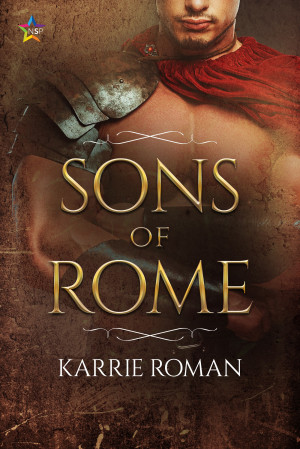 Rated 4.00/5 based on 1 review
His duty is to the Empire, but his heart belongs to just one man. More
9CE Germania

Battle weary and fearless Centurion Drusus Tuscus has only three more years in the Roman Legions and then he can return home to the mother and young brother he was forced to leave behind seventeen summers ago. Drusus has suffered much during his years in the Legions: defeats, fallen comrades and excruciating wounds, but this time the stakes are so much higher. As he prepares to lead his warriors from the safety of their winter base, across the Rhine into the wilds of Germania, he awaits the arrival of new recruits to bolster his century. With these men he will face the ferocious barbarian tribes, many still chafing under the yoke of Roman subjugation.

When his friend and Optio returns with the new men, two faces in the crowd change everything for Drusus. His brother, long lost to him and now a man, stands before him and he brings with him a friend, a man named Caius. A man who stirs the long dead fires of Drusus’s heart. Two men, neither of whom Drusus is willing to lose to a barbarian blade.

As the campaign begins, whispers of betrayal and rebellion stoke a fear in Drusus, especially as his arrogant commander refuses to take heed of the warnings. As catastrophe stalks their footsteps Drusus must balance his duty to Rome with his love for Caius. He will give everything he has to save his beloved brother, and Caius, the man who has stolen his heart.

Karrie lives in Australia’s sunshine state with her husband and two sons, though she hates the sun with a passion. She dreams of one day living in the wettest and coldest habitable place she can find. She has been writing stories in her head for years but has finally managed to pull the words out of her head and share them with others. She spends her days trying to type her stories on the computer without disturbing her beloved cat Lu curled up on the keyboard. She probably reads far too much.

Reviews of Sons of Rome by Karrie Roman

My knowledge of the Roman Legions is restricted to what I learnt at high school and high school was a long time ago, so with that basic knowledge I’m unsure if this is historically anywhere near a factual look at life as a Roman Legionnaire but it was highly entertaining. It started slow but was rich in descriptions of the lives the guys were living that it kept my interest and then by the time they were on the march I was totally captivated and lost track of time.

The life of a roman warrior was a hard one with them being conscripted for 20 years’ service to the legion. Drusus’ dilemma that developed here was totally understandable to me. 3 years away from being able to leave the legion his younger brother and friend are conscripted and sent to his century. Now instead of just finishing his time, he now wants to ensure the two younger members survive their conscriptions.

The brothers do hit it off quickly and the brotherly bond is there from the start, which I did find a little bit strange as they went straight back to being brothers even though Drusus had not seen Cal since he was 4 years old. He didn’t actually know Cal and I’m sure Drusus had changed over the 17 years absence, but regardless the brothers connected and fought together to stay alive.

Caius is the character I wish I knew more about. Even though he was one of the MC’s I don’t feel like we really knew anything about him other than he was a farmer and he loved Drusus

The fight to survive from the crew was well written and kept me in the story.

You have subscribed to alerts for Karrie Roman.

You have been added to Karrie Roman's favorite list.

You can also sign-up to receive email notifications whenever Karrie Roman releases a new book.