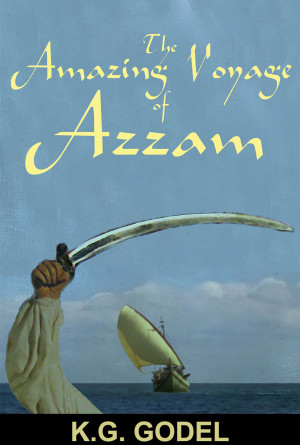 The Amazing Voyage of Azzam

It is 9th century Arabia and Azzam the sailor seeks a reputation to surpass the adventurer renown for seven extraordinary sea voyages. After he crosses paths with a diabolical magician, the mariner is drawn into a hunt for a mysterious and ancient treasure that takes him from the islands of India through the subterranean passageways of Constantinople to the deserts of Africa, with a reluctant sorceress at his side and a crew of faithful rogues under his command, battling giants, freakish tribesmen, and fiery demons along the way. It is a supernatural adventure that will grant Azzam's greatest wish--or destroy him!

The Amazing Voyage of Azzam book trailer
A swashbuckling sailor and an evil sorcerer are in a race across the Arabian world of the 9th century to find a lost treasure of King Solomon that promises ultimate power to its possessor. With a defiant slave girl and sorceress at his side, Azzam battles monsters and demons in a magical quest that may grant him fame and fortune or lead to his destruction.

I shifted between not being able to stop reading, to slowing down because I didn't want it to end. Is The Amazing Voyage of Azzam an Arabic Indiana Jones? A 9th century Star Trek? An ode to other swashbuckling myths and legends? It's a real nail-biting ride, however you define it!

What are you waiting for, get it!!

You have subscribed to alerts for K.G. Godel.

You have been added to K.G. Godel's favorite list.

You can also sign-up to receive email notifications whenever K.G. Godel releases a new book.