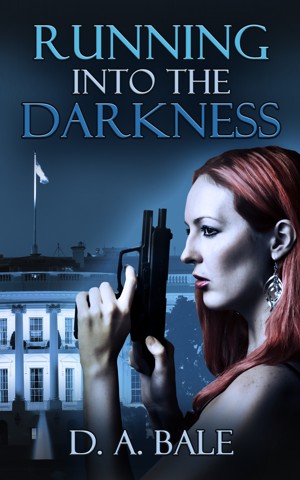 Running into the Darkness

Swept from the frigid New York City winter, Dr. Samantha Bartlett returns to the Midwest to once again confront the sting of death – and face those she left behind. But she’s not alone. A strange man she dubs “Shades” haunts her every step as she seeks answers to the inferno which claimed her grandmother’s life, an eerie reminder of her parents’ deaths. The secrets Samantha uncovers forever shatter the image of those she only thought she knew.

Confronted by Shades, Samantha joins a secret underworld known only as the Elite, where a web of power and control is woven deep within governments worldwide. Their sights are set on the seat of domination behind the Resolute desk that is the powerhouse of nations – the presidency of the United States of America. Samantha becomes the Elite’s unlikely key to infiltrating the White House at its most intimate levels.

The Hippocratic Oath. All doctors swear by it. But the most despicable deeds must be avenged. The quest for blood swallows Samantha in a veil of darkness and threatens to destroy everything she once stood for.

Life is filled with tragedy and Ms. Bale's writing reflects this reality. However, there is always a silver lining...even if one must spend their entire life searching for it.

In her previous career, Ms. Bale traveled the United States as a Government Relations Liaison, working closely with Congressional offices and various government agencies. This experience afforded her a glimpse into the sometimes "not so pretty" reality of the political sphere. Much of this reality and various locations throughout her travels make it into her writing.

She dreams of the day she can return to visit Alaska.

About the Series: Deepest Darkness

How far will you go to seek revenge?

I came across this author through social media networking, and would first like to point out she offers a lot of good advice for independent writers/publishers, and is also very positive in her correspondence which is just what authors need sometimes.

D.A. Bale authors a blog where she often reviews books, mainly in the mystery and thriller genres. So be sure to check this out if you want more information on the author.

Because of her helpful and encouraging advice – and the badass female protagonist preference of mine :) – I downloaded a free copy of her novel Running into the Darkness. I should point out this wasn’t a special gift from the author, and she hasn’t asked for this review. The book is free on most if not all major retail sites (electronic format).

With the introduction out of the way, onto the review:

The novel is an action thriller with some mystery elements, and focuses primarily on a young woman named Samantha Bartlett. When the book begins, she is a resident doctor at a hospital who soon comes into conflict with her boss over her treatment of a patient. From there things quickly get complicated after Samantha receives some tragic news regarding her grandmother, and her life takes a very different – much darker – turn.

The opening chapters are something of a whirlwind journey, involving a tragic accident (or was it?) from the past, revelations about Samantha’s family, the assassination of a congressman, a mysterious stalker in dark glasses, and an adulterous President of the United States who abuses his power. At times it became somewhat difficult to follow, with new characters introduced all over the place and seemingly unconnected events. However, the action did help break up what could have been a slow burner beginning, and it kept me reading to find out how it all tied in.

After a while, Samantha is led to a mysterious letter from a deceased relative. I won’t spoil the contents, but suffice it to say the note reveals she has a personal connection to the aforementioned President, and the tragic ‘accident’ was in fact murder. After that the main story soon kicks in, and Samantha is recruited into a shadowy organisation called the ‘Elite’ who operate from underground. There is she transformed into a sexual beauty / deadly assassin (that classic combination), with an explosive chip implanted in her head just in case she disobeys her new employers. The training sequences reminded me of La Femme Nikita (without the other recruits to keep Sam company). And when she’s done with all the kickboxing, political history lessons and seduction, the Elite send her after the President. How’s that for a first mission?

One thing that really impressed me were the frequent action sequences. They were very reminiscent of many bestseller thrillers I’ve read, excellently paced and with just enough detail to picture the scene without bogging it down. Dialogue was often snappy and almost movie-like, with a lot of brief, tense scenes thrown in among the longer exposition and plentiful conflict. There are lots of mysterious characters with equally mysterious agendas, double dealings, moles, and brutal assassinations of unfortunate people who get too close to the truth.

That truth remains very elusive throughout the book, as it soon becomes clear the Elite haven’t told Samantha everything. In addition to her point of view, the book also follows her ex-lover Joe, a cop turned FBI agent. He’s attempting to piece together the mystery from a different angle, and track down Samantha who almost everyone believes is dead except him. I particularly liked these sections of the book. At times it read like an intricate conspiracy thriller with shady century old companies and super-secret groups up to no good – and more than one attempt to silence Joe.

One thing I should point out is this is most definitely an adult book. There are VERY explicit descriptions of sexual acts and violence throughout, particularly the former (won’t add any more details because it would spoil the story). Suffice it to say the author holds nothing back. While a certain character is portrayed as despicable, he also has more depth than is first apparent and felt surprisingly fleshed out by the end. Various political figures are presented as less than pleasant, to say the least. Given the author’s own political background – and possibly life experiences – it certainly doesn’t paint a pretty picture of our leaders (but did we ever think they were squeaky clean anyway?)

Some of the later revelations / plot developments stretched disbelief well past breaking point. I can’t really say too much because it would spoil the story, but the identities of two villains felt a little much. And the novel veered well into sci-fi territory with an anti-aging formula, elaborate underground lairs, and nanotechnology. Having said that, most action books and movies are over the top, and the characters/action kept me reading all the way to the end. If you can suspend your disbelief, you’ll find Running into the Darkness to be a very satisfying thrill ride.

The book is part one of a series of three I believe, with this book followed by Piercing the Darkness. Not all loose ends are tied up, and it’s not a complete victory for Samantha. To her, survival is a victory in itself. She finishes in a much darker place than she began. Hence the rather apt title. The book is very dark indeed, delving into the bad side of human nature with few – if any – truly good guys/gals around. Joe comes about the closest, with Samantha herself involved in scheming, heinous sexual acts and murder (if not entirely willingly).

I’d recommend any adult thriller fan try this book (especially if they can get it for free). The author has an excellent sense of the action, and has clearly put a lot of work into this book. I found maybe one typo and the various viewpoints were distinct, making me feel I was there with the heroine on her wild adventures, and the various evildoers perfecting their ultimate plan.

Ridiculous is the best I can say for this ludicrous work.

"Running Into the Darkness" is a fast-paced and entertaining read. It will keep you turning the pages well into the night as you follow Samantha on her dangerous journey into a secret organization, the Elite.
There is never a dull moment, as you get to know Samantha and cheer her on in her quest to set things right amidst the evil and wrong doing in this underground entity. It is full of surprising twists and turns.
DA Bale is a great story teller and will have you hooked from the first page.

FEMME FATALE With a Motive!

D A Bale has me hooked! Running Into the Darkness will lead you on a roller coaster through suspense, action and intrigue, and it won't let you off until the ride's over.

It opens doors to rooms you've often wondered about, but knew you should never open. The DC Politico and an underworld organization of assassins are key players, and you'll be surprised which side you find yourself rooting for. Characters are deep and real, and the plot is complex and engaging.

Entertainment is the name of this game, and it's a big boy and girl's ride

Dr. Samantha Bartlett is a personally flawed but likeable character that goes from the life of an ER resident into the life of a superspy. This page turning novel delves into current political intrigue, an "Elite" superspy organization, with page turning "oh my god" scenarios.

"Running into the Darkness" is a pulse pumping romp into the world of double agency that will leave you sweaty and wanting more. From the darkness there is no escape, but bring a flashlight to read by.

(reviewed the day of purchase)
Gary Cummings reviewed on Sep. 7, 2012

Running Into the Darkness starts on a journey that takes place in New York City, Washington D.C. and America's heartland, and entices the reader to put their life on hold until book's end. A secret organization called the Elite, has manipulated key events in the life of Dr. Samantha Barlett, leading her into their realm of political intrigue and murder. Secrets from the beautiful doctor's past draw her to an encounter with the President of the United States. Suddenly her reasons for taking down the President coincide with those of the Elite. Political machinations, international alliances and a primal urge for revenge collide on the streets of our nation's capital. Running Into the Darkness takes off quickly and doesn't loosen it's hold on the reader until the last page.

You have subscribed to alerts for D. A. Bale.

You have been added to D. A. Bale's favorite list.

You can also sign-up to receive email notifications whenever D. A. Bale releases a new book.