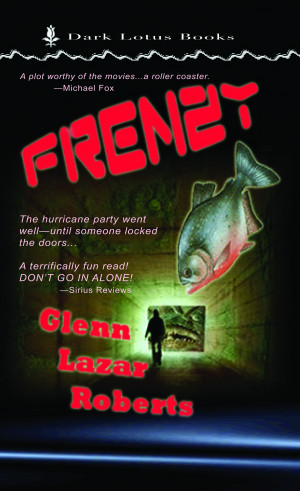 The hurricane party went well--until someone locked the doors. Now biologist Carmen Niles must lead her friends through an underground maze, triggering a deadly scheme to sabotage a medical research center's experiments. More
Deceitful husband Carl persuades his pretty research-scientist wife, Carm, to host a hurricane party in the Nicholas McDonald Cancer Research Center--with horrifying consequences for the party-goers. Their only escape is through a labyrinth of rapidly flooding pedestrian tunnels. Mad scientists, biker gangs, rednecks, a stripper, a lying lawyer, psychics quoting Nostradamus and Edgar Cayce, interact amid predators created by a hi-tech "Monster-Mash" of experimental genechips, based on the ideas of famous physicist Stephen Wolfram. Glenn Lazar Roberts invites you into the deep, dark places where flat, grey walls twist endlessly, pressing in, waiting to trap lost souls, whose denizens, known for the “the strange way they walk,” people can “see right through.” Few heed Ed’s warnings that this water is from the spirit world and that their best protection will not be science.

Former taxi driver, security guard, cook, real estate salesman, Glenn in pre-Internet days worked for a fiction publishing house as a submissions reviewer and editor. A lover of languages, Glenn has degrees in history, anthropology, and law, has taught college, and has translated both Russian and Arabic professionally. He is an international attorney, having done graduate work in Soviet Uzbekistan and represented members of the Wagge tribe of the Central Highlands of Papua New Guinea in legal negotiations. Glenn has written a short story in Arabic, and writes reviews of books published in several languages for SiriusReviews.com. As a writer, Glenn wrote his first novel (Maalstrom) at the age of twenty, and he is still writing the greatest weird books that you’ve never read, including his latest, Quantum Marlowe, now available from TWB Press and available here on Smashwords. (Note: there is no such thing as a Canali suit!)

You have subscribed to alerts for Glenn Lazar Roberts.

You have been added to Glenn Lazar Roberts's favorite list.

You can also sign-up to receive email notifications whenever Glenn Lazar Roberts releases a new book.