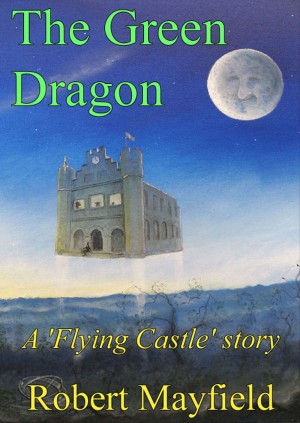 By Robert Mayfield
As in The Sundial, Jack and his mum find themselves caught up in the world of the Flying Castle Stories when Jack notices that the unicorn on the front of the ‘castle’ has new legs! In the best dream of his life Jack finds out exactly what did happen to the unicorn, and how it was rescued from the dragon’s lair. More
On bright sunny afternoons Beauty the unicorn likes to take Rosalinda for a ride in St Leonard’s Forest. Then one day they meet the pixies in a beautiful hidden valley deep in the heart of the forest. The pixies warn Rosalinda that the monstrous green dragon is hunting for Beauty, her unicorn.
In this wildly madcap adventure Greatlion and Barnie come face to face with the monster and there follows a furious battle. Another monster makes an appearance much to their relief. By the time the flying castle returns home it is in a very sorry state of repair!
Rosalinda goes off in search of Beauty, and, luckily for her, fate steps in and plays an unexpected card, for much to the surprise of both Rosalinda and the dragon, she escapes becoming a very tasty morsel when an unexpected guest drops in!

Having spent a few of my early years literally ‘at sea’ I gained a few qualifications and began teaching English and History. With the opportunity of having group of potential actors on my hands I began writing short plays. A very battered old History book prompted me into considering periods like the Ice Age, and this in turn led to my writing The Time Chase in 1983 to show the effect of climate change through the adventures of Robin Aide and the great wizard Ubiquitous. It was in this story that Lucky Jim the tiny green genie came to life.
I then got into lyric writing and I adapted The Ring in the Rough Stuff by Antonia Barber as a play and then a musical, which ended up reaching the finals of the Barclays Youth Music Theatre Awards in 1987/8 at the Queen Elizabeth Hall.
The interest in music led onto the formation of the Blue Flash Music Trust and the discovery of the wonderful acoustics of the Horsham Town Hall. Access to the hall became increasingly difficult and to keep the idea of this unique and iconic building alive I wrote Dan Roberts’ Dream in 2005. Dan Roberts was the custodian of the Town Hall for the then Duke of Norfolk in the 18th century, and legend has it that he is haunting the Town Hall until it becomes famous once again. It was the delving into the life and times of Dan Roberts that sparked off The Flying Castle Stories.

You have subscribed to alerts for Robert Mayfield.

You have been added to Robert Mayfield's favorite list.

You can also sign-up to receive email notifications whenever Robert Mayfield releases a new book.