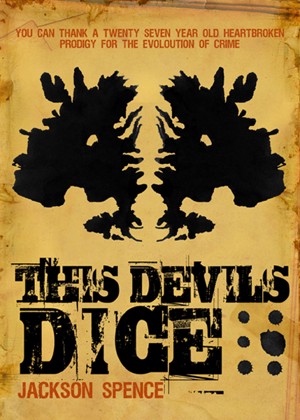 Meet Ethan. Stroke survivor. Scientific student supreme and the first to fabricate genetic identity, a discovery that will change humanity forever. Headhunted and financed by the Baron Vladimir Medvedkov, Ethan is given his chance to shun the scientific community and stun the world with his work. As intellectually wired as young Ethan is, he never suspects that the string of unusual murders rocking the city is linked to his cherished research. Because his only true aspiration is to find her. But is the reason he can't more frightening than losing her in the first place?

This Devil's Dice is a psychological thriller that spins out the consequences of the choices we make within the circumstances we're dealt. Rather than conventional chapters, this novel is divided into six sections. Alternative and unique in look, style and feel, it is delirious with description, subdivided by ink-stained visuals, and self-reflexive as it gets.

If you were lead to believe that *Jackson Spence once came from Royalty only later to be disowned, you’d be wrong and we apologise for that. That he was a disgraced Politician, a debauched Circus Performer, a disembowelled (M)anorexic or a disgruntled Rock Star you would unfortunately again be wrong. We prostrate ourselves before thee and humbly ask of your forgiveness, for Jackson Spence is not in fact one person but actually that of two. His familiars come in the form of Michelle Jackson and Stuart Mc Neil Spence who reside in the beautiful city of Cape Town, South Africa. In the shadows of Table Mountain with pointed pitchforks and sharpened knives they sit forever ready to feast on the facts of life. One of them is qualified in advertising and the other has a doctorate in Neuropsychology. You can decide which belongs to whom; they really don’t seem to care.

You have subscribed to alerts for Jackson Spence.

You have been added to Jackson Spence's favorite list.

You can also sign-up to receive email notifications whenever Jackson Spence releases a new book.