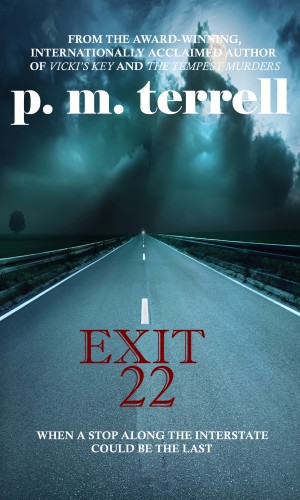 I had my introduction to The Black Swamp mysteries by P M Terrell through Vicki’s Key and I knew it would not be my last. These are my kind of stories, filled with murder, mystery, intrigue and dastardly villains…oh, and a little lovin’ never hurts. 🙂

Chris and Brenda’s meeting…was it Karma?

Assumptions early in the story took me down the wrong road and it didn’t take long before P M Terrell sent me on a different track.

The cops are on their trail, but Alex has it all wrong. He’s like a dog with a bone, so he won’t stop looking for them. Everywhere they turn, someone want to put them in jail…or worse, wants them dead.

I still haven’t figured out exactly what kind of trouble Brenda’s in and Christopher is along for a very bad ride. He’s as political strategist in DC. He has lots of important connections to muckety mucks. Can he save her? Will he? Is romance in the air? He knows it’s was all wrong, but it didn’t matter. We can’t choose who we love.

HE had never failed on his hits, but Brenda was proving elusive. I cracked up when I found out HE knits little bitty baby booties. What a fun and contradictory character.

Computers, Google Earth, can be the life and death of a person. Information is available at your fingertips. It can work against you, as well as for you.

Kept me guessing about the mystery. Is Brenda good or bad? How about Nate? How much is true?

Exit 22 has all the things I love in romantic suspense. Unlikely couples drawn into a mystery. Devious villains wanting to shut them up. Assassins. Oil and all its corrupting influence. Greed. And danger. Danger.. Danger.

A Note From The Author at the end of the book, really got my fires burning.

You’ll need to read to decide, but it makes me furious to know the tax loopholes allowed, along with the corruption of government, shell corps, offshore accounts, US corporations not paying income taxes, social security taxes, medicare taxes, deregulation, less oversight. Beware middle class if you think it will get better…

I voluntarily read a free copy of Exit 22 by P M Terrell.