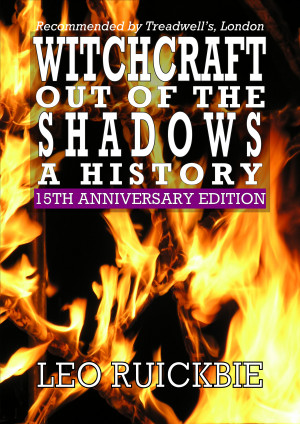 Witchcraft Out of the Shadows: A History

The history and sociology of witchcraft and Wicca, updated in a new 15th anniversary edition. More
This in-depth investigation discovers how the ideas we have about witchcraft took shape thousands of years ago in the myths and religions of the ancient world. It also looks at why these ideas were expressed so violently during the era of the witch trials. Finally, it reveals how witchcraft has been transformed into one of the most radical and fastest growing religions of our age - a religion of equality and compassion that still has the power to unsettle even the bravest amongst us. With new analyses, fresh insights and groundbreaking material drawn from the author's doctoral research into the mysticism, magic and social meaning of Wicca, this is the first book to bring witchcraft fully out of the shadows. This is new and updated 15th anniversary edition of Witchcraft Out of the Shadows.
Available ebook formats: epub mobi pdf html
First 15% Sample: mobi (Kindle) Online Reader
Price: $8.99 USD
Buy Add to Library Give as a Gift
How gifting works
Create Widget
Tags: history magic paganism witches witchcraft wicca goddess sociology neopaganism
About Leo Ruickbie

His PhD is from King's College, London, for his thesis on contemporary witchcraft and magic use, building on research that won him an MA with distinction from Lancaster University. He is the author of several books, all based on rigorous research, Witchcraft Out of the Shadows (2004 and 2011), Faustus: The Life and Times of a Renaissance Magician (2009), A Brief Guide to the Supernatural (2012), A Brief Guide to Ghost Hunting (2013) and The Impossible Zoo (2016), as well as numerous articles and chapters in scholarly publications. He is also the co-editor with Dr Simon Bacon of Little Horrors: Interdisciplinary Perspectives on Anomalous Children and the Construction of Monstrosity (2016), and with Dr Antje Bosselmann-Ruickbie of The Material Culture of Magic (forthcoming).

His work has been mentioned in the media from The Guardian to Radio Jamaica, and his expertise has been sought by film companies, museums and charities, as well as being cited in the current student book for A-Level Sociology in the UK.

Reviews of Witchcraft Out of the Shadows: A History by Leo Ruickbie

You have subscribed to alerts for Leo Ruickbie.

You have been added to Leo Ruickbie's favorite list.

You can also sign-up to receive email notifications whenever Leo Ruickbie releases a new book.