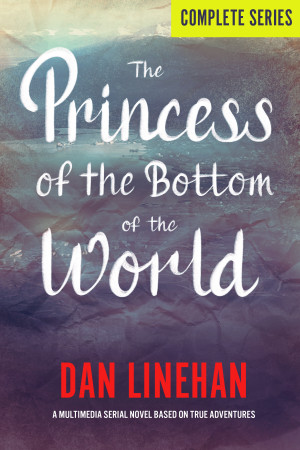 The Princess of the Bottom of the World: Complete Series

In 2000, Dan Linehan switched careers from scientific researcher and engineer to fulltime writer and editor. Focusing on creativity, education, and outreach using multiplatform storytelling, he is widely published—in many forms of writing that include poetry and fiction—and has won awards for his work. Video, photography, and other visualizations often play important roles.

He has authored two highly illustrated nonfiction books that cover historical and technological aspects of aerospace and space tourism, Burt Rutan's Race to Space: The Magician of Mojave and His Flying Innovations (Zenith Press, 2011) and SpaceShipOne: An Illustrated History (Zenith Press, 2008), which has a foreword by science fiction legend Sir Arthur C. Clarke.

Dan has worked for a film studio, a literary journal, a national laboratory, and leading educational publishers. As a writer, he explored Antarctica and the surrounding regions from 2006 to 2007 and lived in Argentina from 2013 to 2014.

During these times when we would like to travel, but cannot, Dan Linehan’s “The Princess at the Bottom of the World” is a perfect book to scratch your travel itch. Dan’s vivid description of the Southern Hemisphere is almost as good as being there. You can vicariously smell the penguins, feel the boat rock, and see, through his words and images, the beauty of the Southern Ocean and its wildlife. You also get to experience the devastation that humans have inflicted on the area, and are continuing to inflict through global warming. There is also a romance threaded through the book with a bit of mystery, unforeseen plot twists, and an emotional roller coaster of great elation and sadness. Great read!

I'd never read a book in this format before, but recently finished it and was so impressed - especially with the multimedia format, which allowed me to see exactly what he was seeing.

The author's descriptions of his voyage from Monterey to Argentina, then through the Falklands and South Georgia en route to Antarctica, were stunning. I felt as though I were right there with him, watching as huge chunks of ice calved off the glaciers, hearing the non-stop chatter of massive penguin colonies, transfixed by the ethereal beauty of black-browed albatross, and being stalked by dive-bombing skuas. I really, really need to see rockhopper penguins now!

I liked how he linked certain passages to photos he took on his journey, so I could see exactly what he was talking about - and when he didn't, I found myself jumping on Google and going down the rabbit hole.

Much of the book is scientific, and the devastating effects of global warming explained in layman's terms. And he describes in painful detail the myriad ways wildlife suffers when they cross paths with plastics, fishing lines and other man-made objects. It's sad to read about, but we can't do anything to stop this unless people are first aware it's happening. And woven throughout the story is a romantic subplot that climaxes in an ending you absolutely don't see coming.

I highly recommend this series to everyone - it'll appeal to anyone who likes adventure, science, animals, environmental issues - and anyone whose heart needs a little thawing out after being on ice for so long.

If you are interested in travel, Antarctica, climate change, or romance, you must read this. How fortuitous that I got to read this before taking my own journey to Antarctica. Thank you, Dan, for sharing the trip of a lifetime.

You have subscribed to alerts for Dan Linehan.

You have been added to Dan Linehan's favorite list.

You can also sign-up to receive email notifications whenever Dan Linehan releases a new book.