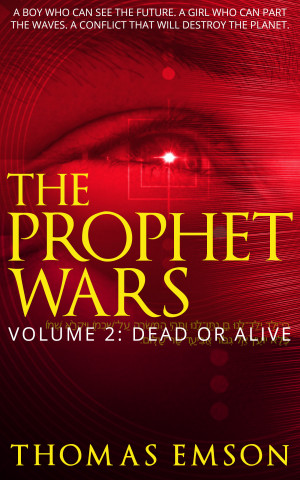 By Thomas Emson
The second volume of Thomas Emson's Young Adult dystopian thriller set in the war-torn, crime-riven world of 2026, mixing sci-fi, fantasy and biblical prophecy. Described by areader as "gripping", The Prophet Wars tells the story of teenagers with psychic powers who are exploited by powerful forces. But the kids won't take it lying down. They fight back... and when they do, all hell breaks loose. More
A boy who can see the future. A girl who can part the waves. A conflict that will destroy the planet.

Britain 2026. Crime is rife. Unemployment soars. There is hunger, there is misery, there is devastation. Our world is on the brink of catastrophe. Earthquakes, storms, wars and plagues blight the planet.

And dark forces are gathering...

The future looks bleak. And 15-year-old Billy Kingdom can see it coming. He dreams about disasters - and days later, they happen.

Through social media, Billy learns that other kids are experiencing similar visions. Online, he grows close to a girl named Tawny Lang.

But one night Billy, Tawny, and other youngsters from across Britain with the same gifts, are kidnapped by armed men. They are taken to an underground compound called The Caves run by Ruby Bleak and her teenage nephew Robin, a child genius lacking any empathy.

Holed up in the subterranean complex, Billy and Tawny develop a bond. The Caves, however, hides a sinister secret. The kids quickly learn that they are only guinea pigs in a plot to control the future. But Billy isn't having any of it and plots his escape.

But will his desire to see his family again tear apart the trust and friendship he has forged with Tawny and create, for himself and the world, a deadly enemy?

The second part of Thomas Emson's action-packed Young Adult thriller set in the near future and dealing with themes such as family, relationship, trust, and the environment.

Thomas Emson is a British horror author. He has had eight novels published, all Snowbooks. His novels include Maneater, Skarlet and Pariah. Skarlet was the first book in The Vampire Trinity, a trilogy of novels that have also sold to Turkey and Italy. Pariah, Emson's take on the Jack the Ripper story, has been published by Tantor in the U.S. as a paperback, an ebook, and an audio book. His acclaimed non-fiction book How To Write A Novel in 6 Months has helped many get started on their writing journey.

You have subscribed to alerts for Thomas Emson.

You have been added to Thomas Emson's favorite list.

You can also sign-up to receive email notifications whenever Thomas Emson releases a new book.