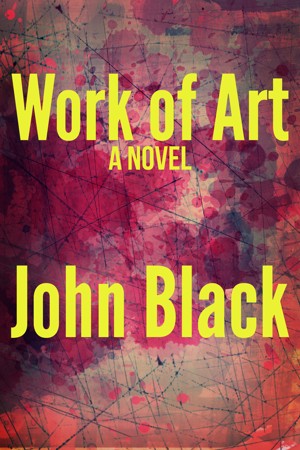 By John Black
After his fiancée, and fellow artist Catherine kills herself in a suicide pact Jason starts on a journey across London and through the memories of their past relationship to find out why she did it. It is a journey that will unearth the many hidden lives that Catherine has led. A journey that will end with a shocking conclusion when Jason discovers Catherine’s ultimate artwork. More
On the night he was awarded the Turner prize for his art, Jason learned that his fiancée, and fellow artist Catherine, had killed herself. Worse, it was a suicide pact. She had leapt off a cliff, hand in hand with her secret lover – with a video camera set up to record the event as their final artwork.

Devastated by this, at first Jason contemplates killing himself too. However he finds himself compelled to discover just what Catherine meant by the cryptic comments she made to the camera just before she jumped.

Jason starts on a journey that will take him both across London and back through the memories of his past relationship with Catherine in the hedonist art world of the nineteen-nineties as he unearths the many hidden lives that she has led.

A journey that will end with a shocking conclusion when Jason discovers Catherine’s ultimate artwork.

I am a writer living in the UK. I was born in Yorkshire but grew up in Lincolnshire. After living in various other parts of the country I am back in, as Henry VIII called it, 'The most brute and beastly of my shires'. (It's not that bad...)

Avoiding anything as sensible as a career I've tried to do as many jobs as possible that would sound interesting in a writer's CV not limited to a postman, night receptionist in a motel, running a market stall, ebay trader and something involving chicken bones and a skip I'd rather not think about too much plus a lot of much lest interesting sounding jobs in IT.

When not writing I do all the usual boring things like walking, watching films, surfing the internet, photography and drinking the odd glass of whisky.

I've previously written for a number of different publications under other names but I am now putting out my first novels with the indie publisher Refraction.

You have subscribed to alerts for John Black.

You have been added to John Black's favorite list.

You can also sign-up to receive email notifications whenever John Black releases a new book.