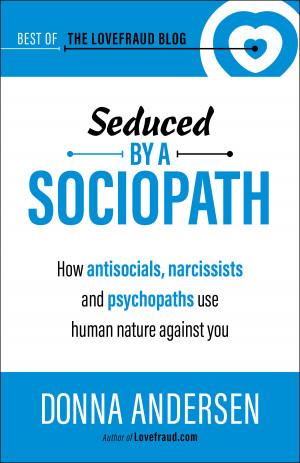 Seduced by a Sociopath: How Antisocials, Narcissists and Psychopaths Use Human Nature Against You

Perhaps you're already involved in one of these so-called "relationships." Your partner, who was once so attentive, has become abusive, and now you're wondering how you got yourself into this mess. Seduced by a Sociopath reveals the insidious strategies employed by these heartbreakers, and why you fell for the lies.

This book is a curated collection of blog articles from Lovefraud.com, the premier Internet website on how to recognize and recover from sociopaths. The content is presented in short, easy-to-read pieces, which together form a complete picture of sociopathic seduction. Articles include:

Seduced by a Sociopath includes dozens of questions and stories submitted by Lovefraud readers, with answers and analysis by Donna Andersen, author of Lovefraud.com. You'll see how sociopaths reel in their targets, or manipulate them once they're hooked.

Donna Andersen previously wrote, Red Flags of Love Fraud — 10 signs you're dating a sociopath. Her first book, Love Fraud, tells her outrageous personal story of her marriage to a sociopathic con artist, and was awarded five stars by the Midwest Book Review. Donna is also co-author of a peer-reviewed scientific article in the Journal of Counseling and Development, and has presented her research to the Society for the Scientific Study of Psychopath

Donna Andersen is author "Love Fraud—How marriage to a sociopath fulfilled my spiritual plan." She is also author of Lovefraud.com, a website and blog that teaches people how to recognize and recover from sociopaths. Her new book is "Red Flags of Love Fraud—10 signs you’re dating a sociopath."

Donna learned about sociopaths the hard way—by marrying one. James Alwyn Montgomery, originally of Sydney, Australia, met her and quickly proposed in 1996. In two and a half years, Montgomery defrauded her of $227,000, cheated on her with at least six women, fathered a child with one of them, and then, 10 days after Andersen left him, married the mother of the child. It was the second time he committed bigamy.

This man had no conscience, no empathy and lied prolifically—which Donna learned, far too late, were the cardinal signs of a sociopath. In 2005, Donna launched Lovefraud.com to educate the public about this destructive personality disorder.

Lovefraud.com now receives almost 2,000 visits every day, and is considered the best source on the Internet about sociopaths. Donna has collected more than 3,000 cases of people targeted by sociopaths, and the Lovefraud blog has evolved into a healing community of survivors. Donna receives many e-mails thanking Lovefraud for saving their lives.

You have subscribed to alerts for Donna Andersen.

You have been added to Donna Andersen's favorite list.

You can also sign-up to receive email notifications whenever Donna Andersen releases a new book.