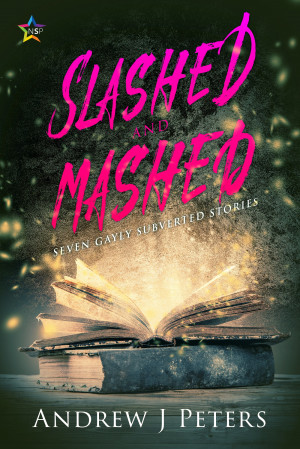 Award-winning fantasy author Andrew J. Peters (The City of Seven Gods) takes on classical mythology, Hungarian folklore, Japanese legend, The Arabian Nights, and more, in a collection of gayly subverted stories from around the world. More
What really happened when Theseus met the Minotaur? How did demon-slaying Momotarō come to be raised by two daddies? Will Scheherazade’s hapless Ma’aruf ever find love and prosperity after his freeloading boyfriend kicks him out on the street? Classic lore gets a bold remodeling with stories from light-hearted and absurd, earnestly romantic, daring and adventurous, to darkly surreal.

The collection includes: Theseus and the Minotaur, Károly, Who Kept a Secret, The Peach Boy, The Vain Prince, The Jaguar of the Backward Glance, Ma’aruf the Street Vendor, and A Rabbit Grows in Brooklyn.

Andrew J. Peters has been writing fiction since his elementary school principal let him read excerpts from his mystery novel over the PA system during lunch period, an early brush with notoriety, which quite possibly may have been the height of his literary celebrity. Since then, he has studied to be a veterinarian, worked as a social worker for LGBTQ youth, and settled into university administration, while keeping late hours at his home computer writing stories. He is the author of eight books, including the award-winning The City of Seven Gods (2017 Best Horror/Fantasy Novel at the Silver Falchion awards) and the popular Werecat series (2016 Romance Reviews Readers’ Choice awards finalist). Andrew lives in New York City with his husband Genaro and their cat Chloë. When he’s not writing, he enjoys travelling, Broadway shows, movies, and thinking up ways to subvert heteronormative narratives.

You have subscribed to alerts for Andrew J. Peters.

You have been added to Andrew J. Peters's favorite list.

You can also sign-up to receive email notifications whenever Andrew J. Peters releases a new book.