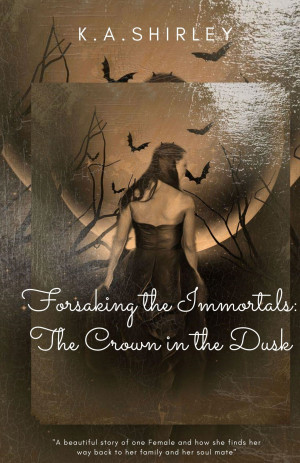 Forsaking the Immortals: The Crown in the Dusk

By K.A. Shirley
Fay was forced out on to the streets of Chicago at the young age of fourteen. For an elven female she was still considered an adolescent. After being left on the streets alone, starving and scared she met two males by the names of Mac and Jake that took her in and taught her to survive, until her family tricked her into coming home, and that is where the real adventure began. More
Fay's journal,
Fourteen years have passed since that jerk of a male kicked me out of my home and threatened those that I loved. During that time, I have learned how to survive in a world that I don't belong in. I am an Elf that is plain to see, but even amongst my own people I don't fit in. I stand five feet two inches tall, that is short for an elf, I have jet black hair that stops at my hips and the strangest mix of sky blue and silver eyes. Most call me a defect and laugh at me, while others say that I'm exotic. So, I guess I am an exotic, defect?
During my first years on the streets I struggled just to survive. Then I met two males, Jake and Mac, they showed me that just because I'm small it doesn't mean that I'm weak. I learned to fight, to truly survive from them. They taught me how to be seen but stay hidden at the same time. They taught me how to work the shadows. During this time, I fell in love with the one that went by Mac. As I got older, we became closer and he gave me the most wonderful thing of all, our son Jacob. Then I lost both of them just as I have everyone else in my life. And I had to go through the pregnancy alone except for my friend Lea, and then I had to send my son to a safe house
Now, my sweet young are locked away at a safe house, while I live in a shitty apartment with a female that reminds me so much of my best friends Kayla that I'm starting to wonder if she is Kayla in disguise. I wouldn't put it past Kayla to pull something like that. So here I am once again struggling to survive and all I can think about is the family, the friends that I left behind, my son and the two wonderful males that I lost to the streets and the crime lords that we always end up working for. I can't help but wonder if my family even knows that I'm alive? Do they know that I'm just two blocks away thinking of them? What would they think of me as a shadow runner? Would my Uncle Callen approve of me and what I do? Would my parents even care?
Then there are the memories of my brother Jonnin. I knew him simply as Jon. We had a close relationship. He was always there when I needed him. It didn’t matter if it was a bad dream or I just couldn’t sleep, he would be at my bedside in a moment’s notice. He would play with me in the yard, at the park. No matter what I did or what kind of mess I made he never got mad or upset with me. We had this thing where I would climb up him and say I got you big brother. He would pause, smile and say no I got you little… sister. Well no one has me now. Now, I am on my own in this god’s forsaken world, and I hate it. I miss my big brother and I wonder if things would be different if he were alive. But even he left me. I think that’s why being so close to my friends and the only family that I have hurts so much. This time it was me that left them, even though I didn’t have a choice.
Download: epub mobi (Kindle) pdf more Online Reader
lrf pdb txt
Price: Free! USD
Add to Library
Create Widget
Tags: vampires paranormal romance science fiction lost love elfs vampires books love abundance vampires ebook love adult
About K.A. Shirley

I am a 37 year old woman who has a love of writing. i have completed two of the novels in the Forsaking the Immortals series and am working on the third and fourth book along with others. I write for the joy of it, but i also write to get my stories out there, to get my voice heard.
I hope that you come to love these characters as much as I have, and that you enjoy there Journey in this adventurous series.

About the Series: Forsaking the Immortals 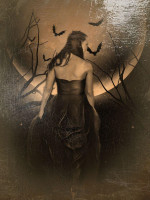 In this series you will follow Fay through one adventure after another as she fights to stay alive, protect her family, and to be with her mates. This is a paranormal series that has Vampires and Elf's. It is based in the future. It starts with Fay finding her way back to her family, and eventually leads to Fays own child finding her way back to their home world Airion.

Also in Series: Forsaking the Immortals

You have subscribed to alerts for K.A. Shirley.

You have been added to K.A. Shirley's favorite list.

You can also sign-up to receive email notifications whenever K.A. Shirley releases a new book.