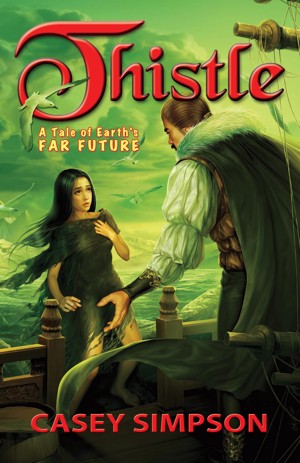 By Casey Simpson
On the edge of a crumbling empire, a young orphan struggles desperately to escape a life of poverty and slavery. Aided by a drunken sea captain, a one eyed peddler and a boy soldier, Thistle fights to save a strange far future Earth

Casey Simpson has worked as a lighting technician on major motion pictures such as Tim Burton’s Batman, Star Trek the Voyage Home, Black Rain, and Ghost among others, as well as such hit TV series as Cheers, Family Ties, Star Trek TNG, The Arsenio Hall Show and the Tonight Show. Casey has designed lighting effects for Disneyland and Universal Studios.
Possessed of Bachelor of Science degree in Computer Science, Casey has taught Linux, and networking, toured the US in a rock band, and built amusement park rides in Kuwait, Tokyo and Paris, and climbed every peak above ten thousand feet in the continental US. Casey once survived being pummeled by heavyweight champion of the world Mike Tyson.
Now living in Laguna Beach, California, the author is hard at work on the sequel to Thistle.

You have subscribed to alerts for Casey Simpson.

You have been added to Casey Simpson's favorite list.

You can also sign-up to receive email notifications whenever Casey Simpson releases a new book.