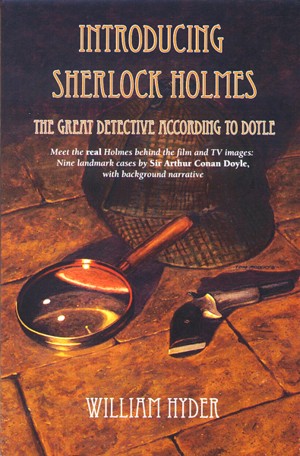 By William Hyder
The Great Detective According to Doyle
The real Holmes behind the film and television images:
Nine landmark cases by Sir Arthur Conan Doyle,
with background narrative by WILLIAM HYDER

For readers who haven’t met Sherlock Holmes in print, this is the
book: a continuous account of Holmes’s career, with the primary
narration provided by the master storyteller, Sir Arthur Conan Doyle.

William Hyder became a Sherlockian at age 10 when he saw Basil Rathbone in The Hound of the Baskervilles.

Born and raised in New York City, William Hyder majored in music at Queens College. After military service he joined the staff of the Baltimore Sun, where he worked as television editor, copy editor and columnist, in addition writing book reviews, theater reviews and feature stories. He enjoyed a concurrent career in Baltimore-Washington theater and broadcasting as performer, announcer, director, composer and conductor.

A member of several Sherlock Holmes societies, including the Six Napoleons of Baltimore and the Baker Street Irregulars of New York, Hyder is the author of From Baltimore to Baker Street and editor of The Napoleon Bust Business Again (volume four in the BSI Manuscript Series). He has contributed articles to Sherlockian journals in the United States and Great Britain and has spoken and performed in his own sketches at many Sherlock Holmes gatherings.

You have subscribed to alerts for William Hyder.

You have been added to William Hyder's favorite list.

You can also sign-up to receive email notifications whenever William Hyder releases a new book.