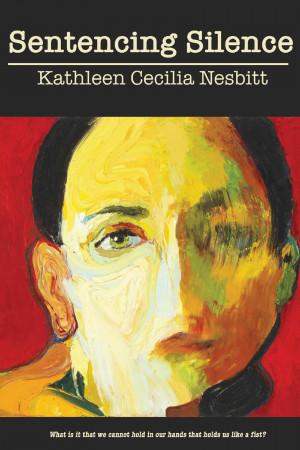 Rated 5.00/5 based on 2 reviews
"What is it we cannot hold in our hands that holds us like a fist?" This is the question that June, Reni, and Sandy must answer. Each of them only wants to return to college to study and write poetry. Unfortunately, the circumstances of their lives caused by secrets from their past make this impossible. More
Set in Chicago in the 1980s, Sentencing Silence chronicles the journey toward breaking the silence that holds June, a trophy wife, Reni, a call girl, and Sandy, a factory worker captive in the traumatic past that thwarts their dreams. June denies her future by submerging herself in domestic life as she tries to repair a damaged and dangerous marriage. Embracing her anger, she recreates herself as Reni and decides becoming a call girl is both her fate and a fast-track to earning tuition and living independently. As "the life" takes its toll on her, she falls deeply in love with an eccentric young artist who renames her Sandy and promises to return her to a time of unadulterated innocence. With each turn through tragic loss and increasing silence, she slowly realizes that it is the crushing silence she's been burdened to keep that prevents her not only from realizing her hopes, but the possibility of any meaningful existence.
Available ebook formats: epub mobi pdf lrf pdb txt html
First 15% Sample: epub mobi (Kindle) lrf more Online Reader
pdb
Price: $7.99 USD
Buy Add to Library Give as a Gift
How gifting works
Create Widget
Tags: coming of age family saga womens fiction survivors self awakening poetry on loss abuse sexual traumatic past hashtag metoo breaking silence
About Kathleen Cecilia Nesbitt

Kathleen Cecilia Nesbitt studied fiction and poetry writing at Columbia College in her hometown of Chicago, and earned an MA in Transformative Language Arts and an MFA in creative writing from Goddard College in Vermont. She has worked voluntarily assisting incest survivors, domestic abuse survivors, incarcerated women, homeless teen mothers, and veterans with PTSD break their silence through the healing power of the written word. Her poetry and fiction have appeared in Whiskey Island Review, Big City Lit, 20 Pounds of Headlights, Threads, Dagda, Dead Beats, and Mojave River Review. She is currently working on her second novel in between walking her beloved old English Cocker Spaniel, learning to cook like a boss, gardening, and dancing the Argentine Tango. She is a survivor.

This is a very hard ugly book, but one for the literary canon of sexual abuse. Hats off to the author. It is just like the cover: beautiful but ugly. This is an unraveling, but told in writing that is actually more intimate than the subject matter, because it is told creatively, and as how trauma happens: like the cover, a melting of faces, everything, memories all jumbled together. Who am I? It's all a bad dream.

As someone who can personally relate to the subject matter, I will say that I very much appreciated the *treatment of the subject matter: it's not sympathetic or sentimental but just very real. It is a lot and very heavy, but like I said—for me, more so because of the way it's being told. This is very good creative writing. A style that is very weird to be creative for the subject matter of sexual abuse, but so apropos and necessary I'm discovering because I don't think I've ever read something like this handled like this.

Since everything is so heavy, I'm not sure if I was impatient for it to hurry up and end for that reason, or because it felt like it dragged toward the end, which is where the treatment became too symbolic and actually sentimental, and corny here and there. But it's one of these books that needs to be written. Like this. *PS The mother was just as horrible. I think the end made me uncomfortable because in uncovering the evil of the father, it seemed all too easy to make gradations of evil and so automatically qualify the mother as "less evil" and so good and a victim. But a lot of truth was said about the mother too, so I think that may be just my interpretation. It's like a quote I remember from the movie The Girl with The Dragon Tattoo, and she, broken, goes to visit her mother in the home, and her mother looks at her and says, I should've chosen a better father for you.

If you've ever considered your past and thought, "I was a different person back then," you will immediately and deeply appreciate the premise of this extraordinary novel, which examines the phenomenon of redefining/evolving identity as a survival response to trauma.

The novel is three distinct narratives, connected by transitional episodes, and each narrative is a reinvention of self. This would be hard to pull off under any circumstances, and the depth and aplomb with which Nesbitt achieves this are almost impossible to believe. This is literary fiction of the highest caliber, and as such, it requires an investment from the reader, which is perhaps asking a lot in our age of distraction. However, the dividends paid for your investment are like nothing you've ever seen before, and you will be enriched beyond your wildest dreams.

Among the book's many astonishments is the wholly distinct voice and characterization of each "narrator," and equally amazing is the fact that the book's defining style characteristic--a poetic attention to and expression of detail--changes expression in response to each narrative. In the first part of the book, narrated by June, the intensity of detail is incredibly precise and almost claustrophobic, and it is also fragmented, like a mosaic that hasn't been fully assembled, but the pieces are gradually thrown down close enough to their final resting place that when you step back the picture is, if not yet clear, at least recognizable. This transitions to Reni, in whose narrative the detail is derived from dissection; the combination of grit and almost cold distance put me in mind of Patricia Highsmith. Once Reni's life has been sliced paper-thin and examined under a microscope, we shift to Sandy, whose expression of detail is lush and sensual, drops of wine in a cup that finally overflows, spilling her out to be collected and restored to herself in a finale that is as eviscerating as it is brilliant.

A note: The text could have used one more fine-grit-sandpaper polish by a proofreader, but DO NOT allow that to distract you. This book is the real thing, and these tiny snags in the tapestry of this novel are unimportant.

You have subscribed to alerts for Kathleen Cecilia Nesbitt.

You have been added to Kathleen Cecilia Nesbitt's favorite list.

You can also sign-up to receive email notifications whenever Kathleen Cecilia Nesbitt releases a new book.