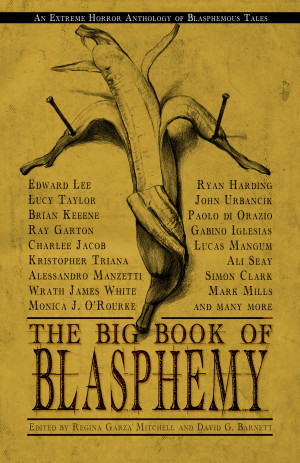 The Big Book of Blasphemy

Dave Barnett lives on the outskirts of Orlando, Florida with his blind dachshund named Chauncey. During the day he works as a graphic designer for his Fat Cat Design company designing books for lots of small press publishers. At night he becomes DJ L.D. and runs Necropolis, a long-running industrial / EBM / synthpop / electro night at The Independent Bar in downtown Orlando.
Somewhere in there he has managed to run Necro Publications for the past 17 years, publishing some of the best names in modern horror: Edward Lee, Charlee Jacob, Gerard Houarner, Mehitobel Wilson, Jeffrey Thomas, Patrick Lestewka and dozens of others in various anthologies.
Dave has been published in a couple of the Shivers anthologies from Cemetery Dance Publications. He also has a story in the two-author chapbook The Baby along with Edward Lee. His collection, Dead Souls, came out form from Shocklines Press in 2004 and at least a couple of people seemed to like it.
The Fallen: Book 1 is the first in what will hopefully be a long series books containing tales about angels and demons that will finally come together (fingers crossed) in one climatic battle for Heaven.

You have subscribed to alerts for David G. Barnett.

You have been added to David G. Barnett's favorite list.

You can also sign-up to receive email notifications whenever David G. Barnett releases a new book.