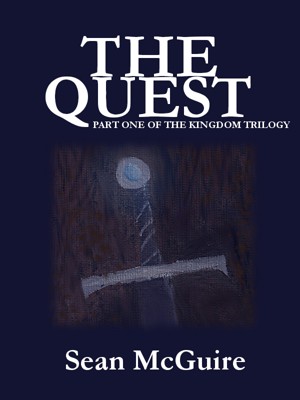 The Quest (Part One of The Kingdom Trilogy)

A mysterious old man comes to him in the wake of tragedy. He is Menemaeus, the immortal warrior who has defended Upper Nola and the rest of Arman's world for millenia. His job was supposed to be done. The Nameless One was supposed to be locked away forever, after his last defeat at Menemaeus' hands.

He's back. Somehow he's back. And Menemaeus has discovered that Arman is the heir of a dynasty that brought peace and glory to Upper Nola after that last defeat. Menemaeus wants Arman to ride out and warn the world, while he seeks the only weapon that can stop the Nameless One's power.

Arman had no idea what would befall him if he made that choice. With trembling lips, he said yes.

Are you ready to watch a world fall apart?

Sean McGuire is a man without a hometown, and a man who has a story to tell, just like you.

In 1992, he was born to a Roman Catholic Marine officer and an ex-Methodist lady. In his childhood, he moved with them between California and Virginia multiple times. They wound up in Milwaukee when his father retired from the Corps to get a theology degree, and in Montana when a college hired him as a professor. Sean graduated from high school there, and went to Kansas to study English at Benedictine College.

This is an amazing coming of age tale. Arman behaves as any of us would in his situation-- he's lost, confused, and unsure of himself. But instead of moaning, he tackles his challenges head-on and learns what he needs to so that he can unite the people of his world. At the end, when he takes command of the fort, we see the powerful leader emerging from everything he's gone through. Can't wait for the next installment!

I truly enjoyed this book. McGuire does a great job of showing Arman become a man and take his rightful destiny. A lot of the plot twists took me by surprise, and kept me reading. At several points, I wouldn't put it down. He does a nice job of showing relationships change and develop. I look forward to reading the next book he writes.

You have subscribed to alerts for Sean McGuire.

You have been added to Sean McGuire's favorite list.

You can also sign-up to receive email notifications whenever Sean McGuire releases a new book.