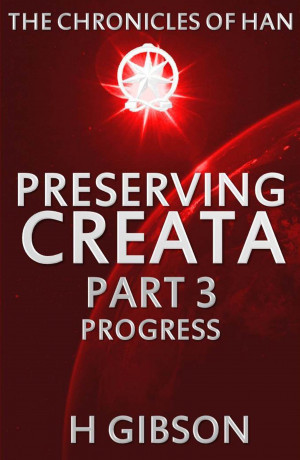 By H Gibson
Rated 5.00/5 based on 1 reviews
Part 3 of The Chronicles of Han, Creata adventure. Han Storm returns to New Haven to wrap up the challenge with his enemy in a unique fashion. The three colleagues, Daniel Racewater, Panam Ridgeback and Han Storm start their new career as Security Force Investigators, inadvertently being placed on the path of Destiny in assisting their Planet. More
As per reader request, this is the third part that has now been made available independently from the compiled Preserving Creata book which consists of Part 1 to part 7. #adventure #chroniclesofhan #series #spaceopera #romance #paranormal #metaphysical #esoteric #multidimensional #astral #telepathy

Han Storm returns to New Haven to wrap up the challenge with his enemy in a unique fashion. The three colleagues, Daniel Racewater, Panam Ridgeback and Han Storm start their new career as Security Force Investigators, inadvertently being placed on the path of Destiny in assisting their Planet.

"Out of the many lives I’ve lived in the physical realm, which life memory should I recall? I guess the best one should be the latest adventures that started on a Planet called Creata.
Creata can be found in a dimension parallel to what you call Earth, and is very similar to Earth.
I am Han, and this is my life-memory . . . "
Download: epub mobi (Kindle) pdf more Online Reader
lrf pdb txt
Price: Free! USD
Add to Library
Create Widget
Tags: ancient knowledge paranormal biography metaphysical astral teleportation esoteric pastlife multidimensional
About H Gibson

About H Gibson, Author of The Chronicles of Han Storm: (Preserving Creata, Book 1, Part 1-3 on Wattpad) or purchase direct from Blog.
The Chronicles of Han is a series of books that came about after NDE experiences. In 2004 the Author of Chronicles of Han Storm was caught up in a cooking oil explosion, sustaining third degree burns to 35% of her body including her face and both hands. She twice went into cardiac arrest and was resuscitated by the emergency personnel. It took quite a while for her to get back to functionality, with healing, physiotherapy and two small children to contend with (her baby was seven weeks old when the accident occurred.)
In 2008, after the scarring finally started to heal with the products her husband had developed for her, he gave her a laptop, encouraging her to stop saying that she would one day like to write a book and actually do it.
One book quickly became a Series of reading excitement

About the Series: The Chronicles of Han 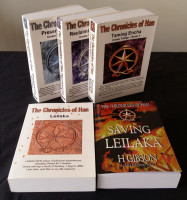 Loosely categorized as real life past live adventures enhanced with metaphysical/paranormal undertones, a good dash of romance and a sprinkle of horror (or step-by-step esoteric guide manuals) . . .

If you love Avatar, The Matrix, Dune, Stargate or LotR, these books will suite you.

"It was not my original intention for people to grow and heal through reading The Chronicles of Han. I started to write the books to heal myself. My husband and a host of fans cannot wait to read the rest of my retellings, finding it extremely exciting stories."-H Gibson, Author, The Chronicles of Han Storm.

Also in Series: The Chronicles of Han

These revised books do read a lot easier than the original translations. I'm glad you finally got around to re-doing them. I just wish you will get on with the rest of the books still with the editor so we can have more adventures of Han.

You have subscribed to alerts for H Gibson.

You have been added to H Gibson's favorite list.

You can also sign-up to receive email notifications whenever H Gibson releases a new book.